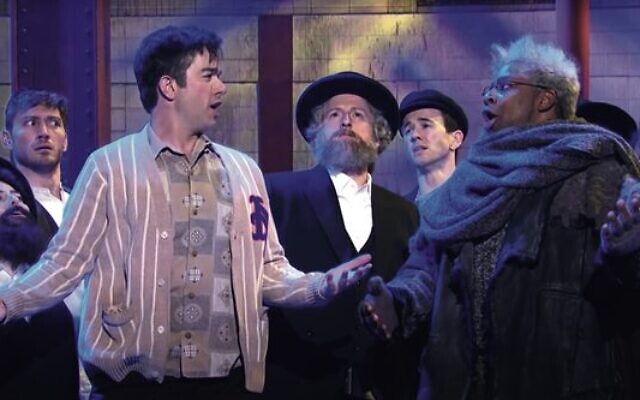 SATURDAY Night Live is famously “live from New York” and recently the show lived up to its motto.

In a skit, guest host John Mulaney led the cast in a parody of Broadway musical numbers that included a homage to Fiddler on the Roof. Mulaney played a newsstand operator singing about the legendary New York subway system, including its “Mole Men” who are said to live in the tunnels.

“If I were a mole man,” he sang, adding in some “yubba-dubbas” from the Fiddler classic “If I Were a Rich Man”.

Soon Mulaney was joined by a chorus line of Chassidic dancers, who do a version of the tavern scene from the musical. When someone asks, “Was that the cast of Fiddler?”, Mulaney replies,

For non-New Yorkers, B&H Photo is a camera and audio megastore in Midtown Manhattan famously owned and staffed by Satmar Chassidic Jews, whose name, depending on your interpretation, stands either for its founders Blimie and Herman, or “Boruch Hashem”.

It was once slapped with a lawsuit claiming it discriminates against non-Jewish employees (the suit was dismissed).