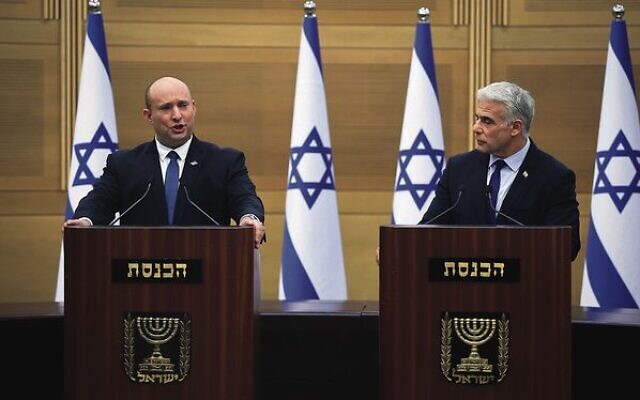 The process of dissolving the Knesset was to begin with the introduction of a dispersal bill after Israeli Prime Minister Naftali Bennett and Foreign Minister Yair Lapid announced they were voluntarily disbanding their coalition.

Israelis will vote in the country’s fifth election since 2019, after Bennett and Lapid concluded there was no way to maintain the current government.

As part of the Knesset process, Lapid will likely take over as prime minister next week, possibly on Tuesday, and hold the post through the election and until the formation of Israel’s next government.

The pair announced their intention to dissolve parliament and call new elections at a press conference on Monday evening. Bennett and Lapid extolled their short-lived government and said all their actions, including the decision to bring the current coalition to an end, were taken for the good of the country.

Bennett cited the coalition’s failure to pass legislation to renew the application of some Israeli law to West Bank settlers as the immediate catalyst. The opposition supports the measure, set to expire at the end of June, but voted against it in order to further destabilise the government. The Knesset’s dissolution will lead to the settler law measure being automatically extended for six months.

“I was told by security officials and lawyers that with the [scheduled] expiration of the Judea and Samaria regulations [at the end of June], the State of Israel will fall into chaos. I will not allow this,” Bennett said.

He added, “We wanted to continue, believe me, no stone was left unturned. Not for our honour – but for the honour of this beautiful country. This was the hardest process of my life, but also the most Zionist.”

The government had been on life support following the defections of Yamina’s Idit Silman in April and Nir Orbach last week.

Speaking with visible emotion, Bennett eulogised his government as “a good government” that “pulled Israel out of a pit” –saved it from an extended political crisis, improved the country’s security and political climate, prevented a new Iran nuclear deal without harming US–Israel ties, and “boosted national dignity”.

“We proved you could put disagreements aside for the sake of the state,” he said.

Lapid thanked Bennett for making a “responsible” decision, saying the PM “put the country before his personal interest”.

“What has happened in the past few days, what has happened here tonight, is further proof that the Israeli system is in need of serious change and major repairs,” Lapid said.

“What we need to do today is go back to the concept of Israeli unity. Not to let dark forces tear us apart from within. To remind ourselves that we love one another, love our country.”

“This is an evening of great news for millions of citizens,” he said.

“After a year of a determined campaign by the opposition in the Knesset, with great suffering in the Israeli public, it is clear to everyone that the most wretched government in the history of the country has reached an end.

“My friends and I will form a broad national government led by Likud.”

“We will establish a fully, fully right-wing government that will restore security to the streets.”

Ultra-Orthodox leaders and newspapers rejoiced at the impending dissolution of the government – one of the few in recent memory that didn’t include Charedi parties – and many attributed its downfall to divine intervention.

“His name is praised in the world!” said Rabbi Shalom Cohen, the spiritual leader of the Shas party, which represents Sephardi and Mizrahi Jews.

“A government that harmed and tried to destroy Judaism and the sanctity of Israel and harmed the weak has been driven from the world. The Holy One, blessed be He, has had mercy on the people of Israel.”

As Israel moves into election mode once again, Justice Minister Gideon Sa’ar declared that the goal of the coming poll “is clear: preventing a return to power of Netanyahu and enslavement of the country to his personal interests”.

Defence Minister Benny Gantz, who on Tuesday appeared to rule out reuniting with Netanyahu to form a new government, told Kan news, “It’s a pity that the country needs to be dragged into elections.”

He later tweeted, “Elections and periods of instability are not a good thing, but we will meet them determined in the goal of putting the citizens of Israel before everything.”

Bennett and Lapid had constructed Israel’s most diverse coalition ever, setting out with 62 MKs from eight parties spanning the political spectrum from left, right and centre. But it lost its majority in April, bleeding MKs and – for several weeks, the entire Islamist Arab Ra’am party – and faced multiplying political crises.

Health Minister and Meretz chief Nitzan Horowitz, whose party member MK Ghaida Rinawie Zoabi was also one of those who turned against the government, insisted that “this government succeed above and beyond.”

“This is a historic government that saved Israel’s democracy,” he tweeted.

Lapid was still due to fly to Ankara on Thursday to meet his Turkish counterpart Mevlut Cavusoglu, the Foreign Ministry said on Tuesday.