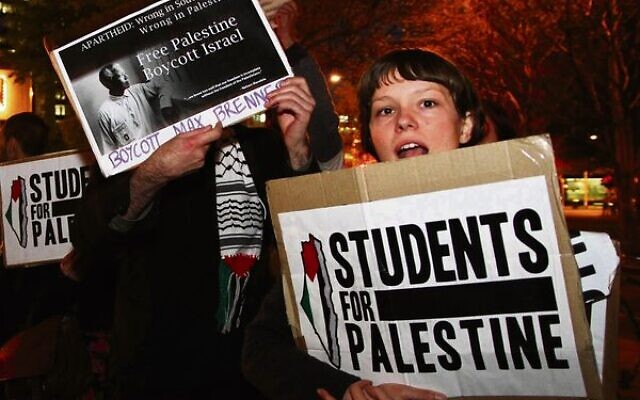 In last week’s paper (AJN 14/10) a National Tertiary Education Union (NTEU) motion on Israel was described as a “disgrace” and rightfully so.

As Zionist Federation of Australia (ZFA) president Jeremy Leibler noted, the NTEU “packed lies, half-truths and obfuscations into a motion that is specifically designed to reduce understanding of the Israeli–Palestinian conflict and to increase the exclusion and danger that Jewish Australians are facing on campus”.

The NTEU motion follows a series of student union motions that similarly deny Jewish indigeneity to Israel, accuse Israel of genocide and apartheid, and have the temerity to (incorrectly) define for Jews what is, and what is not, antisemitism.

Antisemitism on campus is getting worse. These motions have alarmed the Jewish community not so much because of their blatant lies and bias, but because of the culture of intimidation they are instilling on campus. Jews are being singled out in class, excluded from clubs for being Zionist and verbally abused whilst walking across campus.

Ariel Zelwer, a University of Melbourne student, said he was called a “Zionist pig” because he wore a kippah as he walked past a pro-Palestine student rally on campus. He recalled that one of the protestors “started hurling abuse [and] calling us ugly, colonialist settlers”.

Australasian Union of Jewish Students (AUJS) president Natalie Gunn said that any objections against antisemitic motions and incidents on campuses have been met with sneers and at times outright laughter.

“Unfortunately, the majority of student unions do not take the welfare of Jewish students seriously,” she said. “Jewish students have become accustomed to apathy when they have reported or spoken up against instances of antisemitism.”

A major problem is that people outside the Jewish community do not properly understand how antisemitism manifests itself. They reduce antisemitism to racial or religious hatred, but Jews are also discriminated against because of Israel’s existence.

The Jewish community has been advocating for the wide adoption of the International Holocaust Remembrance Alliance (IHRA) Working Definition of Antisemitism. One of its important features is its list of examples, which demonstrate the many ways antisemitism manifests itself.

The working definition is, at heart, an educational tool, designed to show well-meaning people how to engage in discussion about Israel and the Israeli-Palestinian conflict – and, indeed, how to vociferously criticise Israel, if that is their wont – without crossing the line into antisemitism.

AUJS is at the coalface of rising campus antisemitism with community organisations doing what they can to support its senior leadership all year. While we are hopeful that discussions with universities across the country will result in meaningful change, not all administrations understand the depth of the issue.

These discussions have culminated in the realisation that there is a lack of objective evidence about the full range of antisemitism on campus. While the most egregious examples of antisemitism are made public, there is little public awareness or discussion about the lived experiences that go unreported. Behaviour and language modification, the deliberate concealment of Jewish clothing and accessories and the fear of being graded differently for objecting to offensive lecture content are among these hidden encounters.

While not as obvious as a direct antisemitic attack or slur, these attitudes are what prevent the free engagement in political and academic expression for Jewish students and there is a critical need for them to be recorded.

Jewish PhD student Jasmine Munn-McDonnell, who is conducting research about antisemitism at the University of Adelaide, said the learning environment at the university has become increasingly hostile towards Jewish students.

“The fact that Jewish students are going out of their way to hide identifying features that could give away their Jewish identity should warrant more support from campus administrations. Jewish students shouldn’t feel like they should hide in online classes because they’re afraid to attend physically,” she said.

For this reason, the ZFA is in the process of commissioning an independent survey that will document the lived experiences of Jewish students. The data will show university administrations what is happening on their campuses and provide evidence to spur them into taking action.

Expected to be rolled out at the start of semester one next year, the survey will record the experiences of current and recent Jewish university students across Australia. For Jewish students who have censored their opinions and felt isolated from genuine academic and social participation, this survey will present a unique opportunity to have their voices heard.

The findings will serve as a key resource for combating antisemitism on campus for years to come.

To Jewish students on Australian campuses, we know the frustration you must feel at the complacency of your administrations; that antisemitic motions are becoming progressively mainstream. But know that you will not be marginalised, because the entire organised Jewish community is behind you. It is an outrage that we are still fighting antisemitism, but at least we are fighting it together.