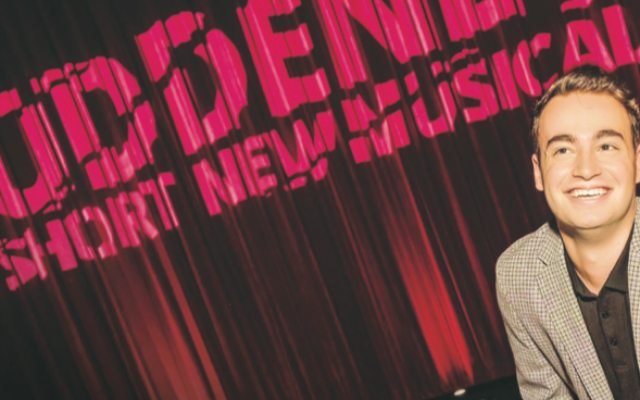 After completing a communications degree at RMIT university and then studying at the Victorian College of the Arts, former Mount Scopus College student Dean Gild received a career-boosting invitation to work with a New York production company.

Gild, 22, was thrilled to be offered an internship with the company, which has helped stage Broadway shows such as The Book of Mormon and Angels in America.

“That was very exciting news for me,” Gild told The AJN. “I have loved the theatre and entertainment since I was a boy – I performed in the Scopus musical Guys and Dolls in year 12.”

The New York internship was due to start in April 2020, but COVID-19 brought a halt to his plans, with Australia closing its borders and the pandemic spreading rapidly in the United States.

“Just a few weeks before I was due to leave Melbourne, I realised it was not happening and that COVID was very real,” he said. But instead of sitting idly waiting for the lockdown to pass, Gild established his own company, DHB Theatrical, and received a grant from the Cybec Foundation – which supports emerging talent – to help make his first movie project, a musical theatre short film titled Suddenly. He approached his friend Jordie Race-Coldrey, a pop artist who has worked in theatre, to join him as director, composer and co-writer on the project, which started as a five-minute song and grew into a 30-minute production.

As the project developed, Gild took on the role as creative producer and enlisted the help of musical director Ned Wright-Smith, choreographer Mia Brown and cinematographer Alex Campbell as well as other creatives. The cast was led by experienced actor Katie Weston – who is head of music at Leibler Yavneh College – and Kara Sims, a musical theatre performer who has been cast in the upcoming Moulin Rouge musical. Suddenly is about the strained relationship between a mother (Weston) and daughter (Sims) and how they are forced to confront the issues causing their rift.

Gild said the film incorporates innovative theatre techniques based on a script written for film. When the COVID-19 lockdown came into effect in Melbourne last year, Gild and Race-Coldrey held all of the casting, production meetings and readings over Zoom. “We even held rehearsals over Zoom with choreographer Mia Brown in her dance studio and the dancers at home in their living rooms.”

It took until early December before the whole team could gather together at the Alex Theatre, St Kilda, for rehearsals. Suddenly premiered at a special cinema screening at the Lido Cinemas earlier this year and a simultaneous release for free viewing on YouTube and on the Suddenly website.

“Everyone working on the show did it on an unpaid volunteer basis,” explained Gild. “During COVID-19 we had this opportunity to provide creative people with an outlet, and we were lucky that people wanted to be involved in an exciting new work – that was a huge factor in being able to produce Suddenly.

For many it was an opportunity to use Suddenly as a springboard to their next career step.

Suddenly is Gild’s second film project after his 2018 short film, In My Head, that he wrote, directed and co-produced while studying at VCA and has been screened at film festivals.

“Suddenly was the first time I have produced and written a musical. I got a lot of support from the Jewish community for the project,” he said, adding that it was filmed at the Besen Centre at Mount Scopus College.

To watch Suddenly, and for behind-the-scenes access, visit www.suddenlymusical.com