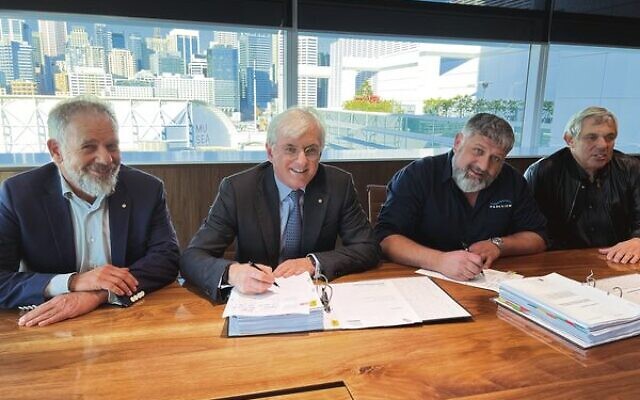 THE long-awaited construction of the new Hakoah White City development has finally begun after a construction agreement was signed off last week.

“As I think about all the effort required along the way, it’s been a herculean task to get to this point.”

Parkview Constructions will undertake the development, which is planned for completion for late 2023 or early 2024. Between signing agreements, raising funds, dealing with rampant inflation, labour shortages and building companies going bust, Lowy says reaching this point has been “the hardest thing I’ve done”.

“Every step of the way it’s been hard, but it makes it all the more rewarding for where we are now.”

The sum of $75 million has been raised for the project to get off the ground, including $15 million in state and Commonwealth government grants.

“This has been a shared project,” Lowy said.

“The funding for it has come from a very broad range of major donors in our community. It’s also come from 3000 members who have signed up for pre-membership two years prior to opening.”

Hakoah has a proud history of serving the community since it was established in 1938. The previous club premises on Bondi’s Hall Street operated from 1975 until the building was sold in 2009.

Soon, 50 years after the original institution opened, an upgraded hub to fulfil the needs of the Jewish community will become a reality.

“It was the right decision to sell the building in 2009 because it was no longer able to keep up with the needs of the community,” Lowy said.

“The old club in Bondi was really the centrepiece of the community and a much-loved institution. Those who used it, particularly my age who grew up with it and the older age group who helped make it happen, they’re all incredibly excited that it’s coming back.”

The new Hakoah club will welcome both religious and non-religious members of the community and will cater for both.

There are plans for it to include event spaces to support a wide range of social, educational and cultural activities, including music, art and dance. State-of-the-art sporting facilities include a fitness centre, a floodlit all-weather football field, a learn-to-swim pool, a five-lane lap pool and weatherproof multi-use courts for basketball, netball, futsal and more.

The club will also provide a range of cafe and dining experiences for members and guests. Sydney Maccabi Tennis Club will develop and operate nine new tennis courts, four mini courts for children and a new clubhouse.

“It will be used by young parents taking their babies and toddlers for swimming lessons, all the way up to the grandparents playing bridge,” Lowy said.

“We’re really building this for the purposes of recreating a hub for the Jewish community. We strongly believe in the concept of Jewish continuity and sustainability, and having a physical building where all age groups can meet and do the things they love to do, but together.

“I think we can share with great excitement and confidence that we are getting going and we should be finished by late next year. That will be an unbelievably wonderful day for our ­community.”