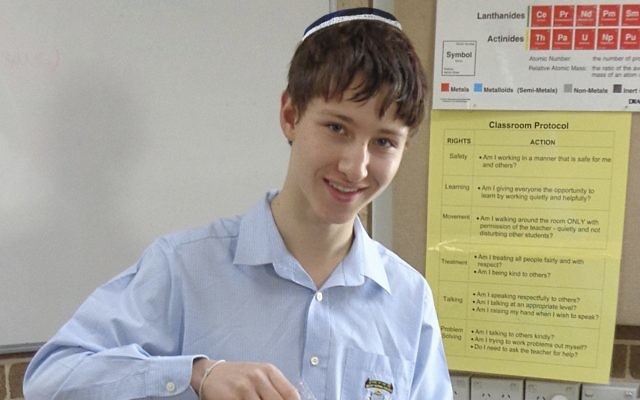 The internationally selective program, which takes place annually in July and August at the university in Haifa, enables senior high school students from around the world to work and study in laboratories with Technion students and professors.

“It’s a great opportunity for young people who have a strong bent towards science, to work in laboratories with senior students at the Technion plus the relevant professors, on a three-week project,” Technion Australia (NSW) executive director Ken Lander said.

“The aim of it is to both give them [the students] knowledge and excite their further interest in science or engineering.”

While the program is open to students from years 11 and 12, Technion Australia (NSW) president Dr Ruth Ratner said, “We had to make a special case for the Technion to take him [Sonnenschein] a year early.

“It is a testament to his academic record and maturity that they made an exception in his case,” she said.

“The high standards normally set for admission to the Technion are applied to SciTech, with the result that it is highly competitive.”

Sonnenschein said he developed an interest in science at an early age, thanks to this father.

“I find science intriguing. It describes how the world works,” he said.

The teenager said he is “looking forward to working in a Technion lab on an exciting project, as well as seeing friends and relatives in Israel”, adding that he hopes to be placed in aerospace engineering, a research area that encompasses everything from unmanned aerial vehicles to missile defence systems.

“The Technion is known as an international centre of scientific and engineering excellence, and I am excited at the prospect of meeting students from around the world,” he said.

Lander described Sonnenschein as “an extremely bright boy” who “can go a very long way”.

While Sonnenschein is still unsure what career path he’ll take, he said: “I would like to do something that involves maths, science and maybe computing.”

Ratner said the difference in hemisphere school years means that year 11 and 12 students generally cannot take time off to travel to Israel for the summer ­program.

“We are pleased that Moriah College has been flexible in allowing Mark to attend the program,” she said.

Students who are interested in the program and may be able to get leave from their school in July-August should contact Technion Australia on 0419 352 803 or info@austechnion.com.