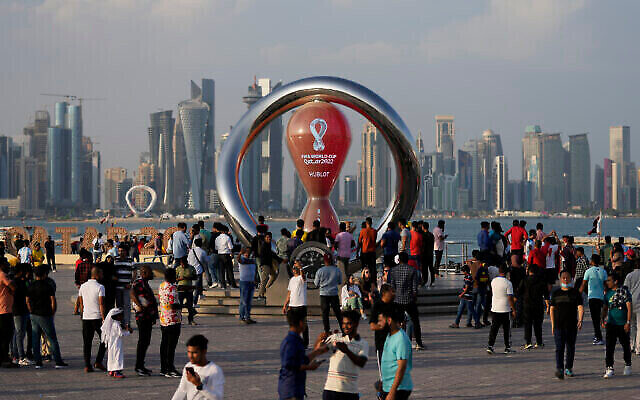 People gather around the official countdown clock showing remaining time until the kick-off of the World Cup 2022, in Doha, Qatar, Friday, Nov. 11, 2022. Israel’s Foreign Ministry has launched a campaign to educate Israeli soccer fans about how to navigate the laws and customs of Qatar ahead of the World Cup there. The conservative Muslim country has no diplomatic relations with Israel but in a landmark first, Israeli soccer fans will be able to travel to the Gulf Arab emirate for the tournament. Photo: AP Photo/Hassan Ammar, File

The first-ever direct commercial flight from Israel to Qatar took off from Tel Aviv for Doha yesterday morning, with Israeli and Palestinian soccer fans on board.

Despite the lack of formal diplomatic ties between the countries, months-long negotiations yielded an agreement allowing Israeli citizens and Palestinians to travel directly to the country for the 2022 FIFA World Cup, played between November 20 and December 18.

Taking off at 10:55am from Ben Gurion Airport, the Airbus A320 aircraft, operated by Cypriot airline TUS Airways, was completely full, with 180 passengers on board.

At a cost of around $550 for a round trip, tickets were in high demand. Overall, TUS will operate 12 flights (six in each direction) during the tournament, enabling some 1,000 passengers to reach the Gulf state from Israel.

Due to the high demand, the company said it would look into the possibility of adding two extra flights during the final stages of the tournament. 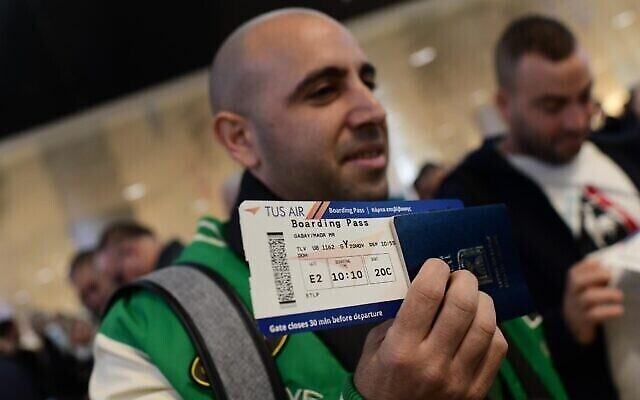 People check in at a counter in Ben Gurion international airport in Tel Aviv, the first commercial flight from Israel to Doha for the World Cup 2022 tournament, on November 20, 2022. Photo: Tomer Neuberg/Flash90

Passengers boarding the TUS flight on Sunday (flight number U8 1162) received tickets printed with the words “making history” in Hebrew, Arabic and English, alongside the Israeli, Qatari and Cypriot flags.

Other Israelis seeking to reach Qatar for the World Cup were booking flights with layovers in Bahrain, Jordan, the United Arab Emirates or Turkey, which are expected to be more expensive.

Diplomatic sources said more than 10,000 Israeli and Palestinian fans have secured tickets for the 29-day tournament.

“This isn’t a destination you get to visit every day,” one Israeli passenger told the Ynet news site before boarding the flight. “It might be my only chance to visit there — it’s a once-in-a-lifetime experience.”

“I didn’t bring the Israeli flag with me this time,” he added. “I always used to bring it with me [to previous World Cup tournaments] but this time I chose not to.”

Taking off from Ben Gurion Airport, the TUS Airways pilot said he was privileged “to be part of the largest Cypriot airline to operate this historic flight today from Tel Aviv to Doha, the first flight flying from Israel to Qatar.

“We’re happy to be serving Israelis and will continue to do so in the future,” he added. 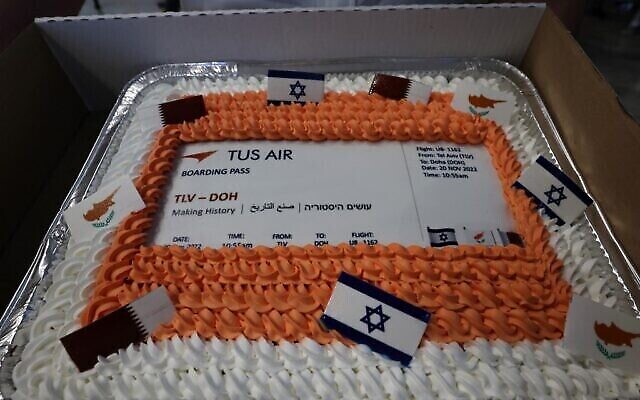 A cake prepared by Tus Air to celebrate the first flight from Tel Aviv to Doha for football fans wishing to attend the World Cup 2022 tournament. Photo: Gil COHEN-MAGEN/AFP

Last week, Israel’s Foreign Ministry warned Israelis traveling to Qatar to hide Israeli flags and items that include the Star of David, as well as LGBTQ-associated items, during their visit. The ministry launched a website meant to educate fans and raise awareness to sensitive issues they may encounter.

The tournament — held in a Muslim country that criminalises homosexuality, bans drugs and restricts alcohol consumption — will also be attended by fans from Iran, Israel’s regional arch-foe.

Qatar established trade relations with Israel in 1996, the first Gulf state to do so, but that office was later closed and Doha has since refrained from upgrading relations. It is the first Arab, Muslim and Middle Eastern country to host the FIFA World Cup. 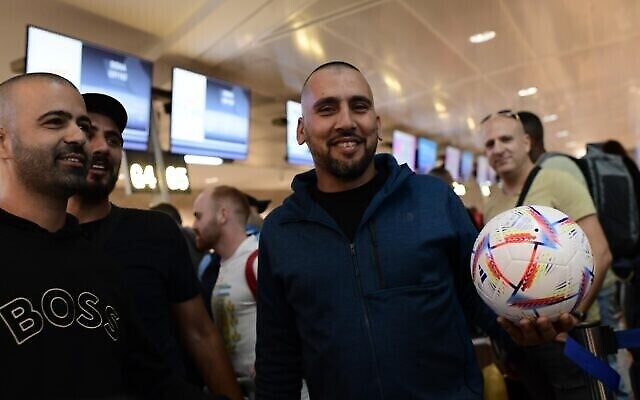 Under the landmark deal making direct flights between Israel and Qatar possible for the first time, both Israelis and Palestinians were able to purchase tickets and attend the tournament.

Despite being operated by a foreign airline, all direct flights are subject to Israeli security measures, as per the agreement.

“With this deal, Israelis and Palestinians will be able to fly together and enjoy soccer together,” said FIFA President Gianni Infantino.

In the statement released by FIFA, a Qatari spokesperson for the tournament said the Gulf emirate has always been committed to letting “all ticketholders… attend matches in Qatar,” without using the words “Israelis” or “Israel.”

Agencies contributed to this report.