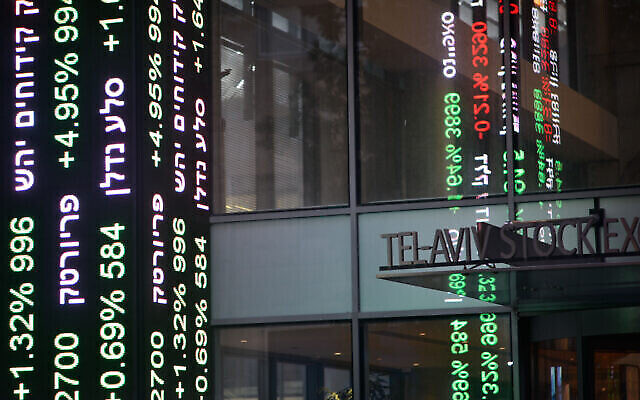 The entrance to Tel Aviv Stock Exchange, in the center of Tel Aviv, December 25, 2018. (Adam Shuldman/Flash90)

Fitch Ratings reaffirmed Israel’s A+ rating with a stable outlook on Wednesday night, noting the country’s strong economic performance and a reduction of the fiscal deficit in 2021.

The credit ratings agency said Israel’s economy rebounded strongly “by about 6.5 per cent in 2021 due to the removal of COVID-19-related restrictions and a strong rise in private consumption.” The Bank of Israel had estimated that the growth rate would reach 6.5 per cent in 2021. More optimistic estimations, made by the Finance Ministry, pointed to a 7.1 per cent growth.

On Wednesday night, Israel’s Central Bureau of Statistics said Israel’s economy grew by 8.1 per cent in 2021, surpassing previous forecasts and marking the highest financial growth rate recorded in Israel in 21 years. According to CBS data, the fourth fiscal quarter of 2021 saw a staggering 16.6 per cent growth in GDP, bringing the yearly average to 8.1 per cent, the highest since 2000, when Israel’s growth rate stood at 8.4 per cent.

The credit rating agency said Israel’s budget deficit decreased from 11.4 per cent of GDP in 2020, when the pandemic hit Israel hard, to 4.5 per cent in 2021, “reflecting a surge in revenue collection by 30 per cent while spending staying nearly flat” after COVID-19-related spending in the form of government aid and grants to households and businesses “led to a 20 per cent rise in 2020.”

Fitch credited Israel’s strong economic activity in 2021 in part to the country’s thriving tech sector, which saw record investments, exits and IPOs and “led to a stronger collection of related taxes.”

But the agency also said Israel has “high levels of political uncertainty” and a possible bumpy road ahead for government efforts to pass a two-year budget for 2023 and 2024 by September 2022.

“There are significant risks given the thin governmental majority (61 MPs out of 120). Failure to pass the budget could result either in a new coalition being formed within the current Knesset, which proved impossible in 2021, or in new elections,” the agency said.

The lack of a budget would hinder “Israel’s ability to address long-term fiscal and economic challenges through effective policy-making,” it added.

Israel’s “security risks” also featured briefly in the Fitch report, with mentions of instability in Syria and Lebanon and the conflict with the Palestinians, “but Israel’s credit profile has shown resilience to periodic conflicts,” the agency said.

Finance Minister Avigdor Liberman said in a statement late Wednesday that the rating “is a vote of confidence in the resilience of the Israeli economy and the government’s economic policy.”

Earlier this week, the visiting head of the Organisation of Economic Cooperation and Development (OECD), Mathias Cormann, told government ministers that Israel should focus on closing socioeconomic gaps, cutting bureaucratic red tape, and boosting competitiveness and productivity in its economy beyond its vibrant tech sector.

The A+ rating is not Fitch’s highest — the agency’s scale spans from AAA to D. An A rating denotes high credit quality with low risk of default, and a strong capacity for paying off financial commitments, but with some vulnerabilities due to adverse business or economic conditions.

Fitch has said that Israel had five-year average GDP growth of 3.7% before the pandemic, roughly in line with the 4% median for A-rated countries.

Fitch, which is based in New York and London, is considered one of the three major credit rating agencies, along with Moody’s and Standard & Poor’s.