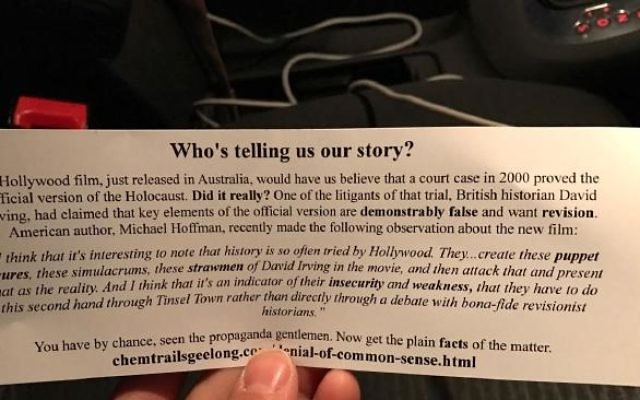 HOLOCAUST denial flyers were distributed at the University of Melbourne and Monash University again last week. The material presents the Holocaust as “propaganda” and claims that the newly released film, Denial, presents a fabrication of history.

The movie tells the true story of Professor Deborah Lipstadt who was forced to defend the historicity of the Holocaust when she and her publisher were sued for libel by the notorious and discredited Holocaust denier David Irving.

“A Hollywood film, just released in Australia, would have us believe that a court case in 2000 proved the official version of the Holocaust. Did it really?” the flyer asks.

It goes on to quote American Holocaust denier Michael Hoffman, author of The Great Holocaust Trial: The Landmark Battle for the Right to Doubt the West’s Most Sacred Relic, who states, “I think it is interesting to note that history is so often tried by Hollywood. They … create these puppet figures, these simulacrums, these strawmen of David Irving in the movie, and then attack that and present that as reality.

“And I think that it’s an indicator of their insecurity and weakness that they have to do this second hand through Tinsel Town rather than directly through a debate with bona- fide revisionist historians.”

While the flyer is not explicitly attributed to a specific individual or group, it does direct readers to the website Chemtrails Geelong which spouts numerous conspiracy theories on a range of topics.

Admonishing the flyers as “virulent anti-Semitism, pure and simple”, chairman of the B’nai B’rith Anti-Defamation Commission Dvir Abramovich said, “I am shocked and disgusted that such revolting brochures have once again invaded university space, not only belittling the horrific murder of six million Jews, but exploiting vulnerable students who may have limited knowledge about the Holocaust and sowing a message of hate and intolerance in the hearts of young people.”

Earlier this year, similar flyers were discovered on the windshields of parked cars at Cambridge University, as well as at University College London, and Edinburgh University, according to the British Union of Jewish Students.

In January, a promotional poster for the film was vandalised with anti- Semitic graffiti at a tube station in London. A Star of David and the word ‘B-Witch’ was emblazoned upon the forehead of actress Rachel Weisz, who plays Lipstadt.

Abramovich asserts that this case is indicative of an “explosive spike… in white supremacist activity across the country”.

“We don’t see it in isolation. It is motivated by hate, but very strategic,” he told The AJN.

“There is a push to move the actions from online to real life – and this is where the danger lies.”