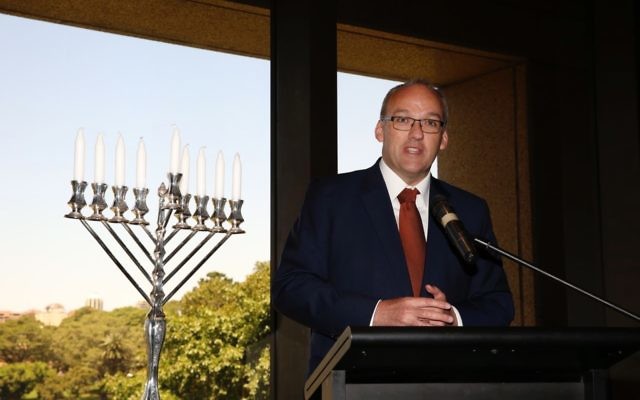 NSW Opposition Leader Luke Foley has promised to strengthen racial vilification laws if Labor is elected in the 2019 NSW election.

AHEAD of the NSW Labor Conference this weekend The AJN can reveal that NSW Opposition Leader Luke Foley personally introduced Bob Carr at his local Auburn Lidcombe Branch meeting earlier this year.

Following that meeting, where Foley referred to “the counterproductive and extreme policies of the current right-wing Israeli Government” and praised Carr for his work to highlight the plight of Palestinians, the Auburn Lidcombe Branch co-authored three anti-Israel motions.

One states that the Israeli government is the “most conservative and chauvinist in the country’s history” and that Israel is “repeatedly defying international law by spreading settlement on the West Bank”.

Another calls on the next Labor government to join 136 nations and recognise a Palestinian State.

A third states that “Palestinians suffer oppression … and have no current prospects of a state of their own”.

Foley proudly noted at the branch meeting that he was the first political leader in Australia to ensure that if his members of parliament go to Israel, then they must spend the same amount of time in Palestinian territories.

“I think we’ll be able to say in a few years Bob, that every Labor leader will adopt this policy for his or her parliamentary party.”

In the foreign policy section of NSW Labor’s Policy Committees Report, 27 out of 50 resolutions relate to Israel. The first of the 50 notes that Labor expresses condolences to people that are victims of terror attacks, that “Labor stands together with people of all faiths and cultures against the heinous and cowardly perpetrators of those attacks that seek to divide through violence” and that “Labor deplores terrorism in all its forms”.

However, despite the fact that parts of Hamas and Hezbollah are considered terrorist organisations by the Australian government, 26 of the 27 motions do not mention, let alone condemn, either organisation for their role in the conflict.