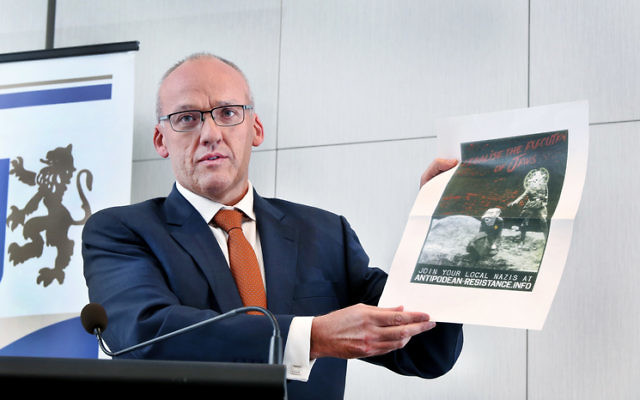 NSW Opposition leader Luke Foley began his guest address at the NSW Jewish Board of Deputies (JBOD) plenum on February 20 in dramatic style, holding a poster produced and circulated by Antipodean Resistance as an example of how “weak, inadequate and broken” Section 20D of the NSW anti-discrimination Act is, before restating his promise to “fix it within 100 days” should Labor be elected to government in 2019.

Foley said, “This poster was displayed in public places in 2016 and 2017 in our state – it says ‘Legalise the execution of Jews – join your local Nazis.’

“Antipodean Resistance have put up thousands of stickers and posters, especially at universities in Sydney, Newcastle and Melbourne – some are directed against Jews, others are directed against Asians, dark-skinned people and homosexuals – and some of those posters express support for violence and for murder.

“Should the government, the parliament and the state turn a blind eye to that? Of course not.”

Foley stressed the Act’s racial incitement provision “has never resulted in a single successful prosecution”, adding the key issue that needs to be overhauled to achieve change pertains to the promotion of, and advocacy of, violence.

“It is our [NSW Labor’s] intention to criminalise that. That is, we would take any [such] offence out of the Anti-Discrimination Act and insert it into the Crimes Act.

“This need not be characterised as a free speech debate, and we need to bust that misapprehension.”

Foley claimed his party has been prepared to put partisanship aside in an attempt to get the broadest political coalition to deliver legislative reform, “so I was astonished and extremely disappointed in December, when the state government announced that it would not legislate to strengthen the law”.

He thanked the Keep NSW Safe Coalition for campaigning for change, and in particular representatives from the Jewish community.

“I salute [JBOD CEO] Vic Alhadeff’s leadership on this over many years, and [Executive Council of Australian Jewry executive director] Peter Wertheim – somebody who has been perhaps the most important adviser to me on the actual weaknesses in the current law and what proposals are best to look at.”

In his president’s report, Jeremy Spinak said that JBOD has been advised by the office of NSW Premier Gladys Berejiklian in a recent meeting that “the government has not rejected reforms [to Section 20D]” and that the Premier “personally supports” changes to it, but the issue “has been conflated with Section 18C of the federal Anti-Discrimination Act, and this has created confusion”.