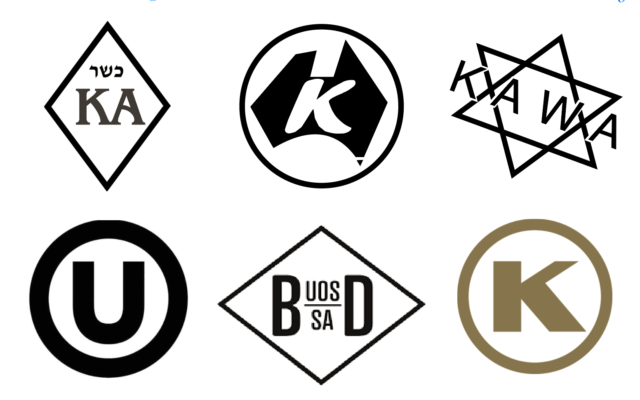 Recent articles in The Age and Sydney Morning Herald (January 3, 2022) highlighted “Australia’s $3 billion food fraud puzzle”. It is a topic about which kosher certification authorities have much to say.

Adulteration of food is commonly defined as “the addition or subtraction of any substance to or from food, so that the natural composition and quality of food substance is affected”.

Intentional food adulteration or “food fraud” is where kosher organisations show their worth as an additional tier of food assurance. In fact it has been claimed that the attractiveness of kosher certification to the US public lies in the depth that reliable kosher agencies go to investigate ingredients and production processes for kosher compliance.

As part of a kosher investigation, we ask companies to complete a checklist that covers ingredients, ingredient suppliers, recipes, co-production (what else is made on the shared equipment), an overview of the manufacturing production scheduling, allergen control and changeover cleaning. We even check the potability of the boiler water used to heat the factory.

This checklist, coupled with periodic site audits and a legally enforceable contractual agreement, form the basis of modern kosher certification.

Do we pick things up? Yes we do.

Common documented areas of worldwide food fraud include the following:

Fish substitution: A report from The Journal of Conservation Biology (22/6/18) noted that studies of more than 9000 seafood samples from restaurants, fishmongers and supermarkets in more than 30 countries found that 36 per cent were mislabelled. In Australia and New Zealand, 40 per cent of the time fish sold as snapper was not snapper.

Kashrut requires that with the exception of salmon and trout (which have distinctive orange-pink flesh) filleted fish skin off cannot be accepted from a non-supervised fishmonger. Kosher filleted fish are batch supervised and must carry proper kosher seals to retain kosher integrity.

The impact of some of these practices could render EVOO, notionally inherently kosher, as non-kosher depending on which oils were blended in. In addition, use on Pesach of the EVOO – a kosher for Pesach item – would not be permitted as many refined oils are kitniyot or contain chametz additives.

Refined oils require kosher certification due to potential sharing of equipment with tallow (animal fats and bones) production. If there are shared production lines, we ensure that a suitable separation is put in place and that kosherisation procedures are closely monitored.

Honey is considered one of the most adulterated foods in the world (Insider.com 26/9/20) with glucose and sugar syrup used as fillers or to replace honey.

For those who seek the therapeutic benefits of honey, these are not available in honey substitutes. And the environmental damage that can be caused as the bee population can be affected thus impacting pollination processes for other plant life.

For the kosher consumer, glucose is frequently derived from wheat and therefore is prohibited on Pesach. As part of a kosher audit, random load checks take place to ensure that only pure honey is being packed as kosher. Also, we check for cross contamination on filling lines.

Regarding other foods one must firstly note that some “additives” may be dangerous and even carcinogenic. Adulteration has been widely reported in milk (melamine – remember the 2008 Chinese milk and baby formula scandal), red chilli powder (added red brick dust), tea (addition of already used tea leaves), and black pepper (added ground papaya seeds).

Examples of intentional adulteration found by Kosher Australia over the years include: The addition of refined canola oil to top up EVOO, the baker who added milk powder to his breads and concealed the powder in flour bags, and the flour producer who kept a bag of vitamins to show the health inspector that he was adding the correct fortification, but the kosher auditor noticed that the vitamins had passed the best before date years earlier.

And there are cases of mostly inadvertent adulteration caused by human error.

A pareve, allergen free, production run was about to take place when the kosher auditor spotted that some of the production equipment was covered with dairy chocolate.

A run of gluten free, lactose free bread mixes were to be produced and when the mixing machines were checked by the kosher supervisor prior to production for cleanliness, milk and regular (gluten flour) were present in substantial quantities.

A documentation error led to a dairy chocolate being included in a pareve product. This was picked up as the auditor cross-checked the certification with the supplier and noted that the chocolate was dairy. Quality assurance had mistakenly documented the ingredient as dairy free and allergen free when it wasn’t.

It is fascinating that early rabbinic literature already recognised the possibility of food fraud by requiring kosher meat to be continually under the control of a religiously observant Jew (see Shulchan Aruch, Yoreh Deah 118).

The same applies to filleted fish, hard cheese, wine and some say all kosher foods where there is a potential advantage in substituting the more expensive kosher product with a cheaper, non-kosher analogue.

Sadly, there have been some very public instances of meat substitution (e.g. the Monsey kosher meat scandal of 2006) that have led US kosher authorities to tighten their procedures.

(Fortunately, the Australian kosher meat industry is structured differently, so the control by kashrut authorities from paddock to plate is good – a subject for another time.)

With the widespread use of home delivery systems such as Uber, Deliveroo and Door Dash, Kosher Australia insists that deliveries must be properly sealed at the restaurant/take away point. If a delivery arrives unsealed, we encourage consumers to reach out to the food vendor for answers.

Given the many opportunities for food fraud, our community is fortunate that the procedures employed by Kosher Australia and other reliable kosher authorities allow kosher consumers to have confidence in the foods they buy for their families.