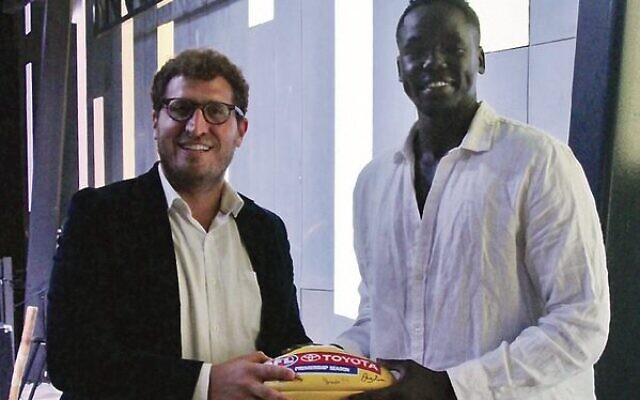 IN a nice mark of support – pardon the pun – by AFL Victoria, and as a gold sponsor of Pillars of Light at Federation Square, AFL Victoria’s multicultural ambassador Reuben William popped in to spread some extra cheer on the fifth night of the Chanukah celebrations.

It had been signed by 15 AFL and AFLW players from a diverse range of backgrounds, including South Sudan-born Akec Chuot from the Richmond Tigers, Sudan-born Buku Khamis from the Western Bulldogs, and several Indigenous players.

William, 23 – who moved from South Sudan to Australia when he was four – was all smiles as he enjoyed his first big Chanukah festival.

He played three AFL games for the Brisbane Lions in 2016 and 2017, played VFL footy for Footscray for the past few seasons, and has just signed with the Werribee Tigers.

Meanwhile, the 11 U18 Jewish players to form half of the Jolson-Houli Unity Peace squad – alongside 11 Muslim players – has been confirmed. The combined team will play against the Lagunta Indigenous Academy as a curtin-raiser to an AFL match at the MCG in 2022 as part of the Indigenous Round of matches. The Jewish players selected are: Guy Chalfon, Maor Chrapot, Jhett Haeata, Raph Light, Brodie Mond, Joel Parasol, Nicholas Pike, Eitan Potash, Charlie Rozenes, Remy Spicer and Noah Spitz.