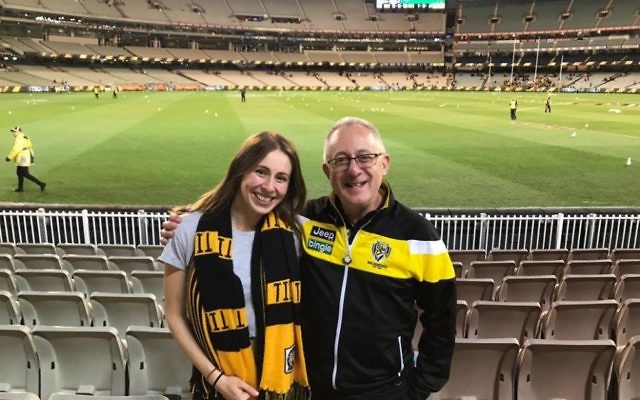 Tony Greenberg (right) supporting the Tigers with his daughter Emily.

YOM KIPPUR is the holiest day of the year for millions of Jews across the world.

For thousands of Richmond fanatics, the 2017 Day of Atonement will be a day like no other, either spent at the MCG or in front of a TV.

It’s not often you are given the opportunity to watch your beloved team play off on the AFL’s biggest stage, the grand final. This is something Richmond FC editorial and research manager Tony Greenberg knows all too well.

It’s been 35 long years since Greenberg has seen his beloved Tigers in a grand final and Yom Kippur or not, he’s just so proud his team are finally back on the biggest stage of the year.

“It’s wonderful to be in the grand final again after such a long absence,” Greenberg told The AJN.

“I’m so pleased for all of our loyal, passionate supporters, especially those who have never experienced anything like this before, like my two daughters Emily and Laura (22 and 19 years old).”

The 2017 grand final will see the AFL’s longest grand final appearance drought snapped as Richmond face the Adelaide Crows but Greenberg was fortunate enough to live through some of the Tigers’ good old days.

“I’ve been fortunate enough to see the Tigers in seven grand finals and to win five of them.”

Greenberg’s involvement with the Punt Road club began in 1987 where he could be found editing the club’s magazine. Fast forward to 2017 and Greenberg hasn’t left.

“There’s never been an atmosphere like this around the club in my time here,” Greenberg said.

“The place is abuzz with excitement.”

The Tiger army has well and truly taken over Melbourne as fans dream about the holy grail and what could be come Saturday.

No matter the result, Greenberg is adamant he’s just proud to be able to watch his team in the final.

“It would mean so much to me, and all the members of the yellow and black faith, if the Tigers won the grand final. Our lives would be enriched in a way that’s hard to describe. Whatever happens, however, we’re so proud of everything they’ve been able to achieve this year.”

Meanwhile, for many Jews across the country, the sanctity of Yom Kippur is far too great and they will review the grand final after Yom Tov is complete.

Plenty will be trying to keep their eyes shut and ears closed, trying to survive the day without hearing the result. It would be nothing short of a Yom Tov miracle to avoid the match result in footy-mad Melbourne.

Rabbis throughout the community face the conundrum of whether to reveal the result from the biggest day in the AFL calendar.

Temple Beth Israel’s Rabbi Gersh Lazarow said he thinks he will actually be the last to know.

“I’m assuming I’ll be the only one without my phone in my pocket,” Rabbi Lazarow said.

“So I’ll probably be the last one to know who won.

“I look forward to making my way through the afternoon experiencing the congregants going through the highs and lows of the day.”

North Eastern Jewish Centre’s Rabbi Daniel Rabin, who plans to watch the game after Yom Kippur, thinks it will be almost impossible to avoid the result. “I have no doubt many Yom Kippur sermons across town will make reference to the game,” Rabbi Rabin told The AJN.

“Although it might be difficult to avoid seeing traffic on the road and noticing which flags will be hanging out the windows.

“Whilst people might be praying for their team to win, don’t forget to pray for all those who need blessings for the coming year.”

The last time Yom Kippur and the grand final coincided with a Victorian team playing was the day St Kilda won their one and only premiership in 1966. Jewish player Ian Symons famously took to the field after speaking to several rabbis about his personal dilemma whether he should play or not.

For Greenberg, his passion for his Tigers trumps all and he will be willing them on from the first bounce to the final siren.

“Yellow and Black runs so deep through my veins. “Although I am not a practising Jew as such, I am intensely proud of my Jewish heritage and have a strong connection with it.”

“That’s coming from my heart, but also the head.”