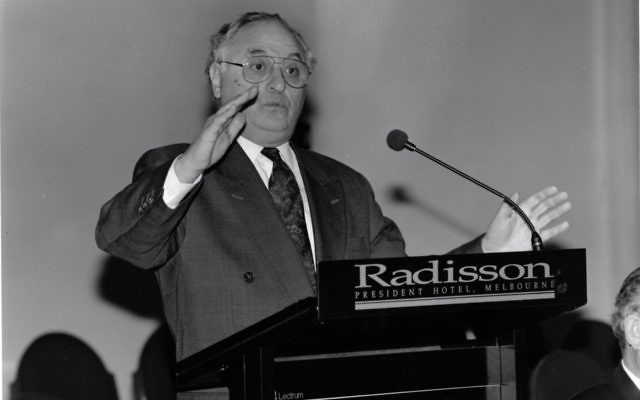 TRIBUTES have been paid to Yehuda Avner, a speechwriter and adviser to four Israeli prime ministers and Israel’s ambassador to Australia from 1992-95.

Avner, who wrote a memoir about his government service called The Prime Ministers died last Tuesday at his home in Jerusalem. He was 86.

As the speechwriter and adviser to Levi Eshkol, Golda Meir, Yitzhak Rabin and Menachem Begin, Avner was present at many of the most historic and private moments of the state and its leaders.

Sable also wrote in a statement sent to reporters that Avner “was a true servant of the Jewish people.”

The statement said that in Avner’s role as adviser “to the generation of legendary leaders of Israel, he was never political, never took personal gain, never shied from conflict.”

Avner “listened, advised and wrote, giving voice to the prime ministers he served and voice to our cause and our people,” Sable wrote.

Mark Leibler, who was Zionist Federation president during Avner’s time in Australia, became a close personal friend. “We had a very, very warm personal relationship and it is very sad that he has passed,” Leibler said.

“He was a man of immense knowledge, a real patriot and his only interest was what was in the best interest of Israel.

“His judgment was superb and it was a pleasure to work closely with him at the time.”

Zionist Council of NSW honorary life president Ron Weiser said Avner was an outstanding ambassador and representative of the State of Israel.

“His command of language enabled him to perform his duties in an exemplary manner. His intimate knowledge of the offices of various prime ministers of Israel gave him an insight that was rare.”

“He will be sorely missed by everyone who knew him in Australia.”