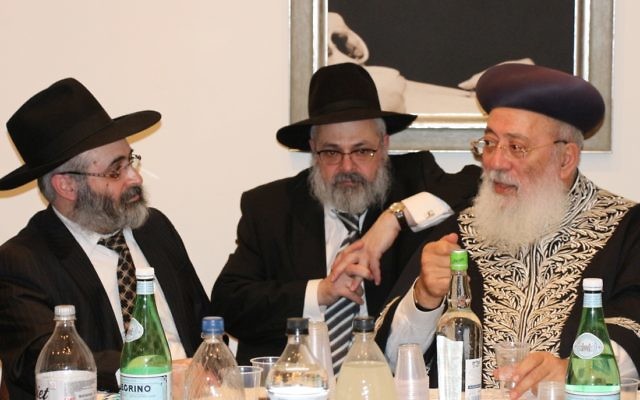 FORMER Sephardi chief rabbi of Israel Rabbi Shlomo Amar visited Australia this month as a guest of the Sydney Beth Din, officially launching a Central Marriage Authorisation Registry in Sydney, while furthering progress on this matter in Melbourne.

The initiative, which already operates in NSW, requires all marriage ceremonies conducted by Orthodox rabbis to be authorised by the Beth Din, thus guaranteeing halachic recognition of the marriage, and the Jewish identity of the couple and their children by all recognised rabbinic authorities throughout the world.

Speaking at Sydney’s Central Synagogue last Wednesday night, where the initiative was formally launched, Rabbi Amar noted that one of the most significant religious issues the Jewish world currently faces is that of the verification of Jewish status.

“Genealogy and identifying who we are has always been a challenge for our people throughout our history and throughout our generations,” Rabbi Amar said in Hebrew, translated into English by Central’s Rabbi Levi Wolff.

During his tenure, Rabbi Amar engaged beth dins around the world to centralise and organise the correct determination of Jewish status.

“[At] the beginning of my term as Chief Rabbi in Israel, I felt it was my responsibility to look after and seek the welfare not only of the local Jewish communities in Israel, but also to see what I could do to assist the growth and welfare of the communities of our people globally,” Rabbi Amar said.

While in Melbourne, Rabbi Amar met with the Rabbinical Council of Victoria (RCV), and had appointments with a number of other groups and communal leaders.

Addressing a gathering of rabbis at the home of RCV president Rabbi Meir Shlomo Kluwgant, Rabbi Amar spoke of the need to establish a central marriage registry in Melbourne with formal processes and protocols.

Rabbi Kluwgant explained that the Melbourne rabbinate is already considering the establishment of such a register, where all marriages performed by RCV members and in Council of Orthodox Synagogues of Victoria (COSV) shuls would need to be authorised by the Beth Din.

“He advised that once we have this set up, he will ensure that the rabbanut in Israel will only recognise marriages performed in this manner,” Rabbi Kluwgant told The AJN.

Rabbi Kluwgant described Rabbi Amar as “clearly a scholar of the highest order, a man of wisdom, principle and integrity”.