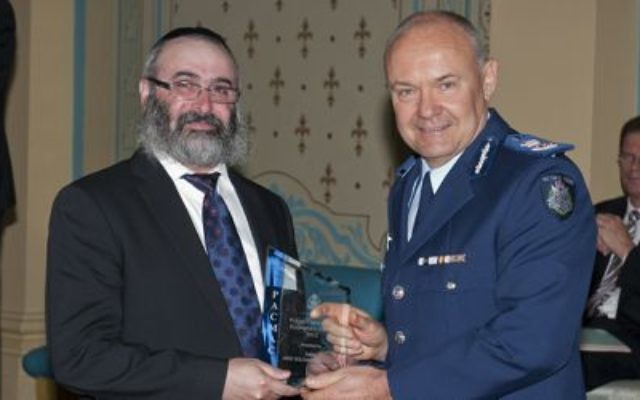 COMMUNAL leaders have paid tribute to Victoria’s outgoing Chief Commissioner Ken Lay, who announced last week he would be hanging up his policeman’s uniform to care for his wife Christine, who is suffering from a serious illness.

Discussing his 41 years on the force, the departing top cop said he was particularly proud of his achievements in the field of domestic abuse.

Indeed, his first appearance as Chief Commissioner was at the launch of a book titled Will My Rabbi Believe Me?, produced by the Jewish Taskforce Against Family Violence and the Rabbinical Council of Victoria (RCV).

“His respect, sensitivity and understanding on the issue of multiculturalism is second to none,” said Rabbi Kluwgant.

Hailing Lay as “a man of vision, a true and inspiring leader”, Rabbi Kluwgant added, “My wife and I were delighted that he was able to join us with his lovely wife Chris for a Shabbat dinner at our home.

“My personal prayers go out to Ken and Chris and their family during this difficult time.”

The sentiment was echoed by Jewish Community Council of Victoria president Jennifer Huppert, who described Lay as “a great friend to the community and to multiculturalism as a whole”.

Expressing her sorrow at seeing him step down, Huppert said, “Under his leadership the existing strong relationship between Victoria Police and the Jewish community continued to grow.”

Early last year, Lay visited Israel on a trip coordinated by the Australian Friends of the Hebrew University.

As well as saying there were a number of lessons the Victorian force could learn from their Israeli counterparts, he told The AJN he was impressed by the complexity and diversity of the Jewish State.

“Israel is a beautiful country with a historical significance that is second to few other countries. From a policing perspective, I think it is one of the most complex policing environments that I have ever witnessed. For this reason alone, my short visit helped me gain a far greater appreciation of some enormous challenges.”