IN a Tokyo Olympic Games producing so many unforgettable moments for Australia, Jessica Fox’s incredible courage and composure to achieve her – and Australian Jewry’s – first ever Olympic gold medal, under immense pressure during last Thursday’s inaugural women’s single canoe (C1) slalom final, will go down in history as being truly “next level”.

Shattered by a costly late gate touch penalty in the women’s single kayak (K1) final just 48 hours earlier, that saw her slip from first to third to earn bronze, Fox battled through “all the emotions” to bounce back by qualifying in first place for the C1 final in 110.59 seconds.

Then, as she paddled to the start line for her final run after the seven other finalists had completed their runs – including a 108.68-second powerhouse performance by Great Britain’s Mallory Franklin – Fox had a steely look in her eyes.

Her mum and coach Myriam Fox-Jerusalmi, and her younger sister Noemie – who is working at the Games as an announcer – awaited her arrival with baited breath near the finish line.

Just 105.04 seconds later – and without clipping any of the 25 gates – Fox raised her paddle in triumph, melting hearts at the venue and across Australia, by winning by more than 3 seconds.

Her dad’s voice finally cracked on the broadcast. “Oh my God… that’s so, so good!”

Moments later, he said, “It’s unbelievable – it’s the race she had to win. She looks so happy – it’s a wonderful sight!”

Tears flowed, as Fox paddled to the shore and embraced Myriam and Noemie, before stepping onto the podium to receive her gold medal and sing the national anthem. 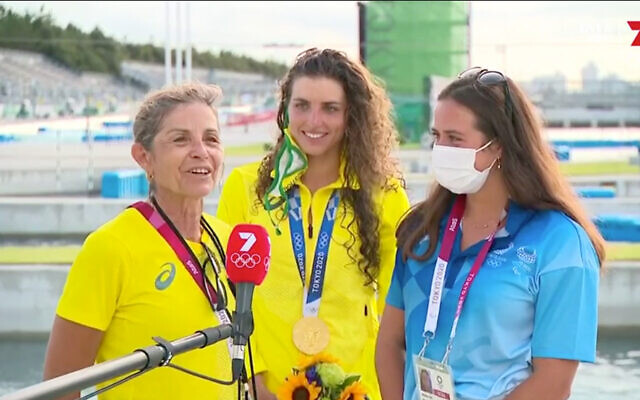 Jessica Fox with her mum and coach Myriam (left) and her sister Noemie (right). Photo: Screenshot

Reflecting on what she’d just achieved, Fox said “I’ve probably never been as nervous as I was today” and admitted she’d thrown-up 20 minutes before the final.

“I thought, okay… that’s just my body telling me to get ready for something big,” she said.

“I’d definitely felt that load and the pressure, and there was a lot of relief at the finish line.

“I really wanted this moment, and I’ll never stop looking at this medal!”

Fox paid tribute to her parents, and thanked everyone who had sent her messages of encouragement.

“My parents have been amazing role models… both being Olympians… so it’s a win for them, for our whole family,” said Fox.

“And thank you [at home] for screaming at the TV – I felt the love, the energy, and the good vibes when I needed them most.” 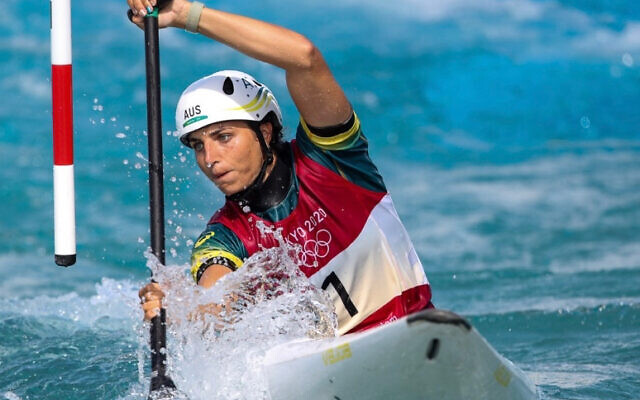 Myriam, standing next to her two daughters, told Channel 7, “I was full of emotion as soon as she [Jessica] passed the tricky gate… and I’m not like that usually, but today I think it was really special.

“With Jess, [I’d told her] ‘you’re not rewarded in sport… you need to go and get it’… Today she went and got it – she was amazing.”

Noemie added, “It was insane for her [Jessica] to be able to hold it together – it’s incredible, and we’re so happy.”

Jessica had also been been a key driver in a decade-long campaign to bring the women’s C1 discipline to the Olympic Games, which finally made its debut in Tokyo.

“To be the first Olympic women’s C1 champion is something so special,” said Fox, “and I’m proud to have been a part of that group of women and coaches who really pushed for this gender parity at the Olympics.

“It’s a massive celebration for all those who were involved, and the women who came before us who didn’t have this opportunity.”