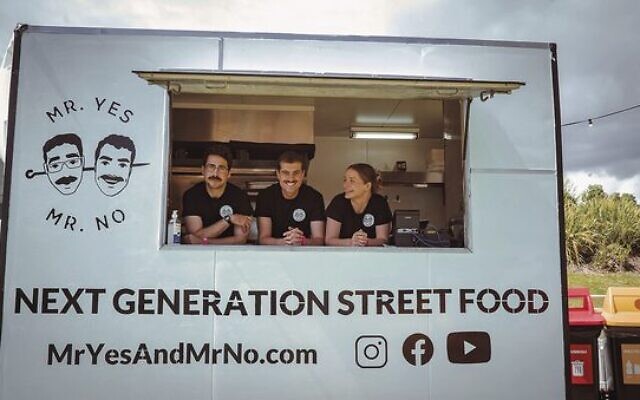 AFTER battles with cancer and mental health, two Caulfield friends decided to ditch the humdrum of normal work in search of “next generation flavours.”

While most people would have considered starting up a business during the COVID-19 lockdown as an unusual and risky endeavour, especially one that required crowds to make money, former Yeshivah College students Jacob Sacher and Daniel Simson said the idea “just felt right”.

Sacher (Mr Yes) and Simson (Mr No) are the founders of Mr Yes And Mr No – an exciting new food truck offering tasty and diverse fusion food as Melburnians take to the streets again.

After being diagnosed with cancer in 2018, Simson used last year’s lockdown to re-evaluate his life, ultimately coming to terms with the notion that there is more to life than the dutiful 9-5 grind in the public service where he worked in logistics for the Australia Department of Defence.

Similarly, Sacher – who is well-known as a comedian – was drawn to the food industry after a severe case of anxiety and burnout which occured at the same time as Simson’s diagnosis.

Declaring that Simson’s chicken was the best he had tasted, the close friends decided to share it with the world, leading to the launch of Mr Yes And Mr No in 2020.

The pair have channelled their friendship and experiences into their food truck, which has a rotating menu offering “Next Generation Street Food”.

The push for outdoor dining, matched with a city starting to get back to normal, meant the truck has already been hard at work, recently stationed at the Play on Victoria concert at the Sidney Myer Music Bowl.

Throughout summer, you’ll be able to track down the truck at a number of concerts at the Sidney Myer Music Bowl, as well as at music festivals including NYE on the Hill and the Distillers Festival in 2022.

“We’ve been blown away by the response to our truck’s launch,” said Sacher, who added that you can find the truck by following the pair on their social media platforms. Their regular spot is at the St Kilda Esplanade market on Sundays.

While the food endeavour is not kosher certified, the pair noted, “As proud traditional Jews who grew up Orthodox, we have an understanding that kosher means different things to different people. To facilitate them we have many vegan options including hummus bowls, and our next-generation sides.”

Simson added, “We also have the option to cater ‘Kosher style’ food for private functions.”

Simson said his love of cooking stems from preparing food for shabbat and Jewish festivals, while Sacher’s love of eating blossomed at shule kiddushes.

“Our heritage is heavily reflected in the food we make,” said Simson.

“We aim to make Melbourne fusion food that celebrates the tastes and diversity of our city. In practise this means we harness flavours from around the world that, like our families, have found a home in Melbourne,” he added, including the tastes of Vietnam, Thailand, Greece and Italy, as well as Ashkenazi and Mizrahi influences.

The business is more than just the food truck – they also create comedy food shows with director Simon McCulluch, their comedy style heavily influenced by their Jewish upbringing.

Sacher has performed at shules around the country, joking that he went into comedy because he didn’t want to be a doctor, lawyer or engineer.

Mr Yes And Mr No is also available for events and parties.

For more information go to @MrYesandMrNo on social media or MrYesandMrNo.com