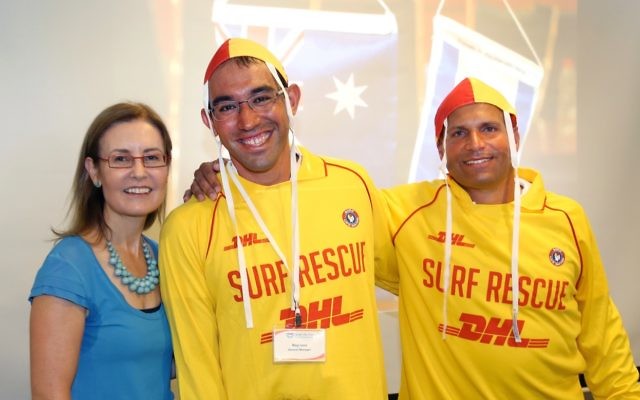 The Australian Friends of Surf Life Saving Israel (AFSLSI) supports the implementation of SLSI’s water safety education program at beaches along the coast of Israel.

The initiative, entitled Israel Nipper Program, is based on the successful nippers schemes that have run on Australian beaches for the last 50 years.

It was introduced into Israel at Beersheva Beach at Ashdod last year after Australian life savers had travelled to Israel to train SLSI life savers.

Premier Mike Baird, a patron of AFSLSI, was due to attend the event but could not, with NSW Attorney-General Gabrielle Upton speaking on his behalf.

Speaking to The AJN, Upton said she was honoured to help launch the initiative: “I know it will have an important impact on the safety of Israelis in the surf from Haifa to Eilat.”

Baird later told The AJN that “as someone who was lucky enough to grow up loving the beach and the surf, this is a project that’s very close to my heart”.

“The AFSLSI not only brings a little bit of what is at the heart of Australian culture into Israel, but more importantly brings invaluable knowledge that gives children the skills to look after themselves in the water, and potentially save the life of another.”

NSW Jewish Board of Deputies CEO Vic Alhadeff also addressed the gathering, drawing on his personal experience of having lost consciousness, and then being saved by a lifeguard after being caught in a rip off Whale Beach in 1988.

“Having endured that traumatic experience, I can personally attest to the value of this program,” he said.

“This is a quintessentially Australian venture and it is wonderful that it is being exported, and to Israel. Seeing the iconic red-and-yellow caps on Israel’s beaches with a Magen David in the corner is a great moment in time.”

AFSLSI committee member and SLSI technical director Michael Gencher told The AJN, “To date, all the trainers in Israel have been Australian life savers and that needs to be supported by the Australian Jewish community through donations, as well as encouraging local Jewish kids to join the local surf clubs.