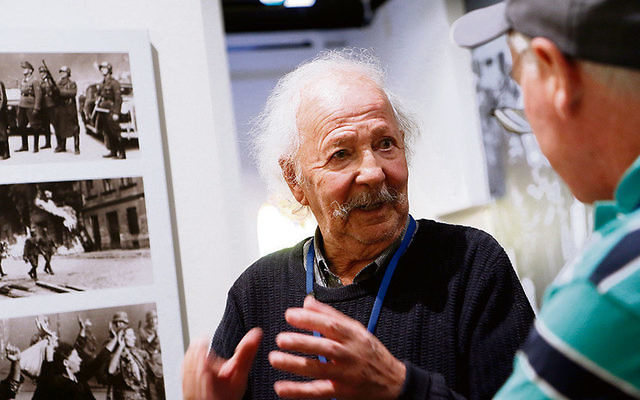 WITH Pesach almost over, the community now turns to preparing for the highs and lows of the three “Yoms”.

The season begins sombrely next Wednesday evening, May 1, as the Jewish Community Council of Victoria (JCCV) in conjunction with the Jewish Holocaust Centre (JHC) hosts the annual Yom Hashoah commemoration at the Robert Blackwood Hall, Monash University Clayton.

This year’s keynote speaker will be Shoah survivor Vera Freidin. Born in Slovakia in 1929, she has related her story of survival in her autobiography Zachor, I Remember. Will You?

Descendants will light six memorial candles, symbolising the six million Jews who died in the Holocaust.

A memorial prayer will be chanted by Rabbi Philip Heilbrunn.

To mark Yom Hashoah, the JHC is partnering again with Maccabi Australia to organise #justlikeyou, its annual national program to remember the Holocaust and emphasise the meaning of “never again”.

This April and May, many Maccabi sporting clubs across Victoria, NSW, WA and Queensland will undertake various commemorations to raise awareness of the Holocaust.

Jeff Sher, president of Maccabi Australia, and David Cohen, JHC vice-president, stated, “We remember that just like you, there were many survivors, and among those who perished were those who loved playing sports but were deprived of that right and other basic human rights during the Holocaust. Most were children at the time – 1.5 million children were murdered during the Holocaust. The message is simple: The only thing that separates them from you is time … they were #justlikeyou.”

Young people will be invited to watch a film about survivors as young European Jews playing sport and to share photos of themselves, family and friends commemorating the Shoah prior to their sports events.

Zionism Victoria’s Yom Hazikaron commemoration service in honour of Israel’s fallen soldiers and victims of terror will take place on May 7 at Blackwood Hall. This year marks the fifth anniversary of the 2014 Operation Protective Edge, launched after the kidnapping and murder of three Israeli teenagers by Hamas, and the 67 IDF soldiers who lost their lives in the Gaza campaign will be remembered.

As the sun sets on Yom Hazikaron, commemorations will turn into celebrations as Zionism Victoria marks 71 years of Israel’s independence. Israeli flags will fly over Federation Square on May 9.

After the success of last year’s Yom Ha’atzmaut, Zionism Victoria is returning to Caulfield Racecourse with a wide range of events, all under cover, providing fun for all ages. The gates will open from 4pm on May 9, with free entry.

Israeli band Kaveret will head a star-studded line-up including Lior, Old Man River, Simon Starr, Jonathan Skovron and Adam Starr on the main stage. “For those who prefer a more chilled atmosphere we are offering the Zappa Club, a hip area for those young and young at heart,” a Zionism Victoria spokesperson said.

Israel Shabbat takes place on Friday and Saturday, May 10-11, with a number of synagogues participating this year in some Israel-themed activities. “This year we are delighted to include Ballarat Synagogue, which will be joining with St Kilda Synagogue in celebration,” said Zionism Victoria.