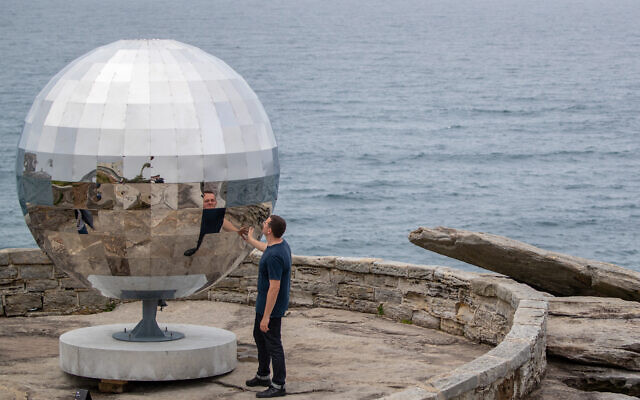 Sculpture by the Sea is always a favourite on the Sydney calendar and usually marks the start of much warmer weather. While this year the exhibition will be battling the elements, the mere fact that the exhibition has returned – after a two-year hiatus due to COVID-19 – is exciting.

This year, once again, Emanuel School graduate Joel Adler has a sculpture featured after his very popular Viewfinder appeared in 2019 – and it is now at Federation Cliff Walk in Vaucluse.

Lens, which is up for People’s Choice and Kids’ Choice prizes this year, is already proving to be a crowd favourite, and it has been years in the making.

“I started working with the ideas that led to this sculpture during the 2019 exhibition, when I had Viewfinder installed, and I was thinking about two people interact with spaces and environments,” Adler told The AJN.

People can go up to Lens, see themselves and the environment around them in the reflection, and even spin the structure to change the perspective.

“I think that’s a really interesting way to interact with it by being part of it. And I think that also puts us in a prime position to take ownership of the natural world, and make sure we’re protecting it and being good custodians.

“For this one, it’s a simple process of spinning and pushing it. And I love seeing people playing with it and touching it. It’s all part of it.”

Sculpture by the Sea is on now until November 7 along the Bondi to Bronte Coastal Walk. Lens is at the Marks Park headland. For information, visit sculpturebythesea.com