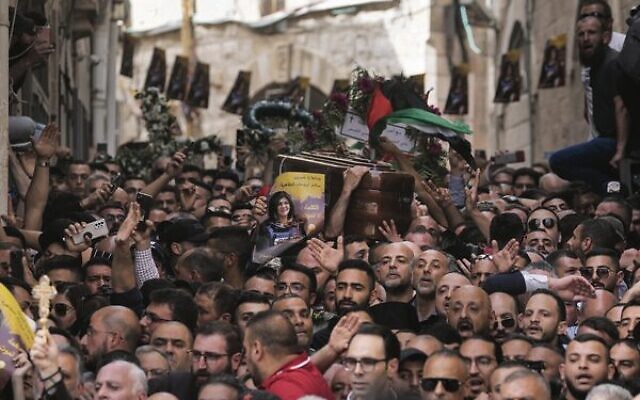 Israel Police has announced an investigation will be opened into the events surrounding the violence at the funeral of Al Jazeera journalist Shireen Abu Akleh, who was killed in the midst of a gunfight between Israeli soldiers and Palestinian terrorists in Jenin last Wednesday.

The announcement came in the wake of international condemnation after video footage showed officers charging at Palestinians who were holding and surrounding the casket at the funeral on Friday, and beating them with batons, nearly toppling the coffin. Police said the casket was seized by a mob against the family’s wishes outside Jerusalem’s St. Joseph’s Hospital, prompting their intervention. Abu Akleh’s brother, however, said the family and mourners had hoped to hold a “small procession” but were “bombarded” by officers as they left the hospital.

He said the police has asked him beforehand where the family intended to hold the procession and demanded that mourners refrain from raising the Palestinian flag.

“We informed them of the arrangements we had made, the roads we planned on walking. They demanded that we not raise the Palestinian flag or chant slogans,” he said, adding he never agreed to the conditions.

In a statement on Saturday, police said that they had planned for a “calm and dignified” funeral for the reporter, but “hundreds of rioters tried to sabotage the ceremony and harm the police”.

“The Israel Police will be looking into the events that ensued during the funeral,” the statement read. “The Israel Police supports its police officers, but as a professional organisation that seeks to learn and improve, it will also draw lessons from the incident.”

The images of police beating mourners have elicited widespread shock and condemnation. White House Press Secretary Jen Psaki called the images “deeply disturbing”, and US President Joe Biden said the incident “has to be investigated”. The European Union said it was “appalled”.

Abu Akleh, 51, a Palestinian-American and a 25-year veteran of the Al Jazeera satellite channel, was shot in the head while wearing a press vest while covering an Israeli military raid in the Jenin refugee camp in the West Bank. The Palestinians insist that she was killed by Israel army fire, while Israel has said there is not yet conclusive evidence that would determine whether she was shot by IDF soldiers or by Palestinian gunmen.

Defence Minister Benny Gantz told foreign reporters last week that Israeli officials intend to carry out a thorough investigation to “expose the truth” of the tragedy. “Unfortunately we do not have a way to conduct a forensic investigation, so we appealed to the Palestinians to give us the bullet [to conduct a ballistic analysis],” he said.

But the Palestinian Authority said it had refused Israel’s request to conduct a joint investigation.

“Israel requested a joint investigation and the handing over of the bullet that assassinated the journalist Shireen, and we refused that, and we affirmed that our investigation would be completed independently, and we will inform her family, America, Qatar and all official authorities of the results of the investigation,” Palestinian Authority Civil Affairs head Hussein al-Sheikh said on Twitter.

Israel’s Channel 12 reported last week that the bullet that killed Abu Akleh is used by both Israeli troops and Palestinian terrorists for weapons, including M16 and M4 assault rifles.

Several Israeli officials called on the Palestinians on Wednesday to conduct a joint investigation, with several Hebrew news sites reporting that the US had been mediating between Jerusalem and Ramallah.

“The bullet that entered her body is in our possession and has been taken to the lab for further analysis,” said the head coroner, Dr Rayyan Al Ali of the Pathological Institute at An-Najah University in Nablus.

Meanwhile, troops from the elite Duvdevan unit have said that they did not see Abu Akleh or fire at her, the Walla news site reported, adding that troops responded with precise gunfire, which was determined by the number of rounds fired and their location.