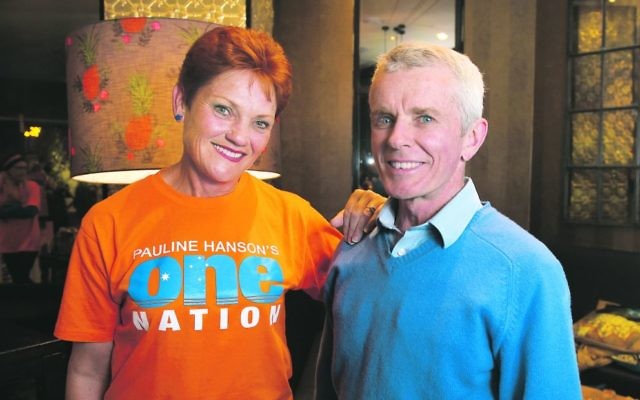 AFTER a week of confusion and accusations of anti-Semitism, One Nation senators Pauline Hanson and Malcolm Roberts have confirmed they will take questions from the community on December 4 at IDF Training in Caulfield.

Yemini claims he was told on the phone the booking was confirmed, but a council spokesperson told The AJN no form was submitted and that the event with the politicians couldn’t be held in Glen Eira Town Hall on the date in question.

Yemini was informed yesterday that there were no council facilities available at the time that could handle the event and, as a result, he is hosting it at his own gym.

Alongside concern that an unknown Jewish group was hosting the politicians, it was Roberts’ response as the story broke last week that also left councillors and Jewish leaders shocked.

“Senator Malcolm Roberts has today blasted the City of Glen Eira in Melbourne for the deep-seated and appalling anti-Semitic behaviour over its arbitrary and bigoted cancellation of a peaceful gathering of the local Jewish community,” Roberts posted on his Facebook page.

“Senator Pauline Hanson and I were to attend the meeting and listen to community concerns, but once council got wind of firstly our presence and then secondly, that it was a Jewish community meeting, their sense of dignity and respect melted,” he claimed.

A spokesperson for Roberts confirmed to The AJN that the claim of anti-Semitism was made “because that is how a respected member of the Jewish community felt he was being treated”, referring to Yemini.

And Yemini backed up the claim this week when he spoke to The AJN.

“I do believe the council is discriminating based on the fact that I am Jewish with views that don’t suit their agenda,” he told The AJN on Wednesday.

“I see it more of an attack on our free speech as Jews and as Australians, which in itself is disgraceful.”

“There is nothing that infuriates me more, as the grandson of Holocaust survivors, than the levelling of false or unfounded accusations of anti-Semitism,” he said.

“Such cries of ‘wolf’ only trivialise the genuine article, and cause the accusation to be taken far less seriously than it must always be.”

Glen Eira mayor Mary Delahunty met with Senator Roberts on Tuesday to explain that the decision was not based on religious or political views.

“I wanted him to know how offensive his comments were and how it diminishes true anti-Semitism and the work done by the peak bodies in our community,” she told The AJN.

“The allegation is at best ludicrous, at worst deeply offensive.”

“I suggested that he might want to broaden his discussions in the Jewish community and informed him about a number of peak bodies, including the Jewish Community Council of Victoria (JCCV) and the Executive Council of Australian Jewry (ECAJ), who would have more of a basis of support in the community.

“We left the meeting with an undertaking that he would seek broader views from the Jewish community.”

She also pointed out the inconsistency in his social media profile, where he attacked the council for allegedly being anti-Semitic but left anti-Semitic comments on the post.

She said Yemini was treated like any other applicant and that the application was assessed on its merits based on conflicting community uses and community safety.

“We informed him last night [Tuesday] that there is no available location that is suitable on that day because his paperwork is still incomplete and we would have to move private bookings.”

Delahunty went on to question Yemini’s motives. “I think Yemini wants the controversy of the booking more than he wants the booking and that’s incredibly irresponsible.”

Yemini said, in response, that “Delahunty is entitled to hold and express her opinions, even if she is wrong. That’s what I love about our free and democratic society.

“All I wanted was the booking as originally promised so we could exercise that same right.”

In a joint statement the ECAJ and JCCV said they generally support the right of people to express their opinions and speak publicly, but neither support the planned One Nation event being organised by the self-styled IJCA.

“Among other things, the comments attributed to the organiser of the event regarding Muslim immigration do not reflect the views of the ECAJ, the JCCV nor those of the mainstream Jewish community,” ECAJ president Robert Goot and JCCV president Jennifer Huppert said.

“The ECAJ and JCCV wish to make it clear that the so-called IJCA: is in no way affiliated with the ECAJ nor the JCCV; operates outside of established communal structures; and does not represent the mainstream views of the community.”

“There is nothing on the record or in the facts to show that the Glen Eira Council has behaved as it did because the organiser is Jewish and because of some deep-seated bias against the Jewish people.”

Abramovich also said that while people are entitled to express their views, he hoped that the senators would not use this platform to “scapegoat, single out and demonise any religious and ethnic group”.