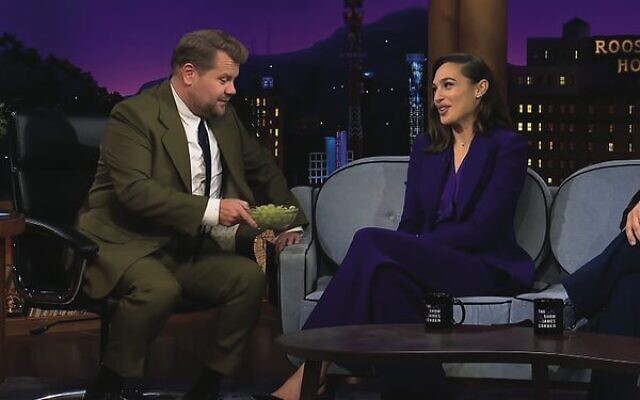 GAL Gadot is back to speaking Hebrew on late-night American TV.

In an appearance on CBS’ The Late Late Show last week, host James Corden subjected the Israeli star to a game titled “Gal Ga-YES or Gal Ga-NO” in which he challenged her to perform a series of tasks, including throwing a grape in the air and catching it in her mouth and reading a line in a British accent.

The second challenge on the list had a more limited audience. “Can Gal Gadot tell a joke in Hebrew and make Hagar laugh?” Corden asked the audience. Hagar Ben Ari, an Israeli musician, is a member of the show’s house band.

Gadot agreed, but told Ben Ari first, in Hebrew, that she better laugh.

“A baby is like instant coffee, do you know why?” Gadot said in Hebrew. “It’s easy to make it and it keeps you up all night.”

.@GalGadot tells a joke in Hebrew and turns out it’s a Gal Ga-YES! pic.twitter.com/NDXUz2gUCF

Separately, the Wonder Woman star, who served in the Israeli army, also gave an interview earlier in the week in which she addressed backlash to her comments during the May war between Israel and Hamas.

“It’s a complicated situation,” Gadot told the Kan public broadcaster. “But at the end of the day, I’m not an ambassador of the [Israeli] Foreign Ministry.

“I’m me … I’m an ambassador of myself, and it is important for me to show the world the Israel I am familiar with and know.”