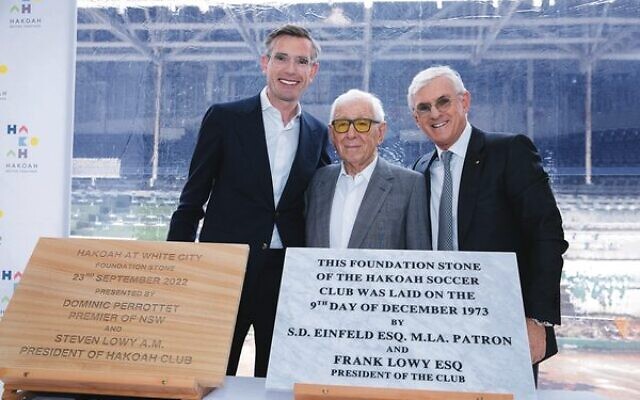 “We stand on the shoulders of legends of the past,” Hakoah president Steven Lowy declared last Friday as construction of the club’s White City project was officially launched by NSW Premier Dominic Perrottet.

Two foundation stones – one for the new centre and a replica of the stone at the original Hakoah Club in Bondi – were unveiled by the Premier, Steven Lowy and his father Sir Frank Lowy, who flew in from Israel for the event, at an on-site ceremony attended by donors and communal representatives.

Calling it “a truly momentous day”, Steven Lowy said the unveiling of the stones was the culmination of “years of planning and enormous hard work by so many people”.

“It’s been a herculean effort … to arrive today to formally mark the start of construction on an outstanding asset that the whole community can use and enjoy, and to serve as the hub of the Sydney Jewish community,” he said.

“Thanks to the enormous generosity of the community and with the ongoing support of the Australian and NSW governments, we are now underway.”

He also paid tribute to past Hakoah legends, noting that his father and vice-president George Farkas were “the only surviving members” of the 1975 board and Frank Lowy, a Hakoah life governor and former president, along with Joseph Brender were the two surviving life members from that time.

“Without the hard work and vision of previous generations, we would not be here today,” Steven Lowy said, adding, “I’m so pleased, and proud, that my father Frank is with us today.

“He, together with a dedicated group of like-minded communal leaders, was a driving force in the early 1970s in establishing the club’s premises in Hall Street, Bondi, and it became a much loved and valued communal hub.”

“While the new Hakoah will be open to all – a genuinely community-wide asset – I am proud that the Jewish community has contributed more than $75 million towards this project,” he said.

He also acknowledged the support of the NSW and federal governments, and the Australian Sports Foundation, and thanked Woollahra Council for its stewardship of the “complex planning process”.

“The new Hakoah will be state of the art, open to all, with sporting and cultural facilities for young and old, those with disabilities, and for everyone who wants to find a sense of belonging and community.

“It’s exciting to see the progress already made on site, and I look forward to inviting you all back here for a bigger and more exciting event when the centre opens in 2024.”

Perrottet said the project “will make a difference for generations to come”.

“What really took me to this project as treasurer was the Jewish community coming together, giving generously,” he said.

“This is something I really do believe we need to do more, the partnership between community and government.”

He said what got the state government’s $7.5 million contribution over the line was that “many of you in this room believed in it”.

“And when you believe in something, you will make a difference,” he said.

Sporting facilities at the development will include a fitness centre, a floodlit all-weather football field, a learn-to-swim pool, a four-lane lap pool, and weatherproof multi-use courts for basketball, netball, futsal and more. Sydney Maccabi Tennis Club will develop and operate nine new tennis courts, four mini-courts for children, and a new clubhouse.

The facilities will include event spaces to support a wide range of social, educational, and cultural activities, including music, art and dance, while the club will also provide a range of cafe and dining experiences for members and guests.

It is scheduled for completion in the first half of 2024.