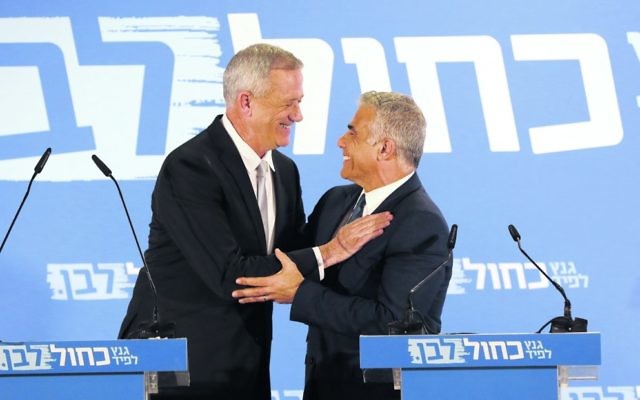 BIBI has suddenly lost his lead in the election campaign, after centrist parties united and galloped ahead in opinion polls.

At the last moment possible according to election rules, the parties of former military Chief of Staff Benny Gantz and popular politician Yair Lapid decided to run together. “We can bring down Netanyahu’s government,” said Lapid. “There is a historic opportunity.”

It has emerged since the deal that Lapid and Gantz’s game plan may not be to push Likud out of power, but rather, forcing Netanyahu to leave the party and then forming a unity government with it.

A recording surfaced on Monday of Lapid saying that if Blue and White win the most seats in the April 9 vote, Netanyahu will resign and his party could negotiate a deal with Likud – an “important and Zionist party”.

Analysts say that the latest developments have shaken up the campaign. “It’ll be very exciting,” veteran political scientist Abraham Diskin told The AJN, saying that the new alliance will change the way that many Israelis vote.

Suddenly, Israel is preparing for a race focused less on small parties, and more on two big parties pitted against each other. “More people will back larger parties and we’ll see small parties collapse,” Diskin predicted.

Gantz and Lapid have called their new party Blue and White, choosing the colours of Israel’s flag to challenge Netanyahu’s image as the only true patriot capable of leading the country. They are also determined to undermine Netanyahu’s brand as Mr Security, and have just recruited a second former Chief of Staff Gabi Ashkenazi to their list.

For weeks, Gantz and Lapid squabbled over who would lead a joint list, until just before the elections committee’s deadline for mergers. They agreed that if successful, Gantz will be prime minister for two-and-a-half years, and Lapid will take over until subsequent elections.

They are presenting themselves as just as strong as Netanyahu on foreign policy, but his antithesis when it comes to domestic matters, leadership style, and integrity – constantly referring to the PM’s corruption investigations.

“The Israeli public will go to the polls on the April 9 to choose what kind of country they want,” said Lapid. “What country their children will live in. A country of investigations, corruption and incitement, or a country of hope, resilience and a promise for the future.”

Netanyahu responded to the unity pact by saying that the alliance, if victorious, would lead a “weak” government, and saying that “only a strong Likud will prevent a left-wing government”.

Netanyahu said: “The country is booming. We’re bringing her to unprecedented achievement.” The choice between Netanyahu continuing this and a left-wing leadership is, he said, “clearer than ever”.

At the launch event of Blue and White Gantz gave an impassioned speech, and declared: “Something went wrong this past decade. Israel has lost its way.

“A government of division and dispute has torn this strong proud nation apart, separating it into distant tribes. A government of divide and conquer drove us against each other. A bad wind began blowing through our streets. We gathered here tonight to say: No more.”