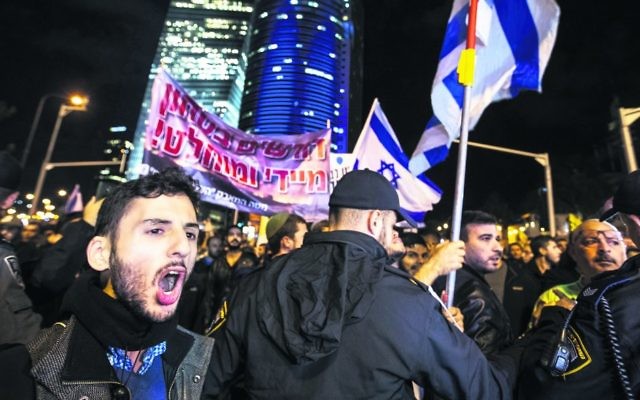 LIFE on Israel’s southern border is back to normal after last week’s rocket barrage, but Hamas is already threatening to strike again – this time in the highly-populated centre of the country.

Gaza militants fired about 460 rockets and mortar shells at southern Israel last week before agreeing to a ceasefire. Some Israelis have welcomed the restored calm, but many say that their leaders let Hamas off too lightly.

Even in the security cabinet there was opposition, and Defence Minister Avigdor Lieberman has quit the government in protest, taking his Yisrael Beytenu party with him. Lieberman said that Israel is “buying short-term quiet, with the price being severe long-term damage to national security.”

There was a protest in Tel Aviv, where around 1000 demonstrators from the south of the country lambasted the government. “Bibi wake up,” they chanted, suggesting that the Prime Minister was being naive in stopping fire against Hamas.

Even those in the south who welcomed the ceasefire had reservations. “People don’t want a military operation on one hand, but on the other hand we fear that the ceasefire is very temporary,” Yael Raz Lachyani, spokesman for the Nahal Oz kibbutz, told The AJN.

She added, “People feel a bit confused, because in the past when we had a ceasefire it wasn’t long before there was fire again.”

Some southerners were furious with government minister Tzachi Hanegbi, from the ruling Likud party, because he said that the rocket attacks were “minor” because they were concentrated in the south and didn’t hit Tel Aviv.

Pollsters found that few Israelis thought their country came out of the fighting on top. Only 19% of Israelis polled by the Panels survey company thought that Israel won the round of violence, while 50 per cent thought that Hamas won.

But Prime Minister Benjamin Netanyahu said that Hamas “begged” for a ceasefire, and insisted that in agreeing to it, he was acting on information that he can’t share. He sees a “wider picture” but “cannot share that with the public.”

As Netanyahu tried to justify the ceasefire to Israelis, President Reuven Rivlin justified Israel’s military actions to members of the international community.

“There is no country in the world that would accept the rocket fire and terrorist activity that Hamas is responsible for,” he told Pope Francis, adding that Israel would not stand by while Hamas “undermines stability and civilians are harmed.”

Since the ceasefire victory marches have been held in Gaza and officials there have bragged about achievements in imposing such intense rocket fire on Israel.

Hamas militant Ismail Radwan gave a speech on the rubble of the al-Aqsa TV building in Gaza City, which Israel struck, saying that the “Palestinian resistance” had established a “deterrent equation” in the latest escalation.

Hamas leader Yaya Sinwar predicted that in the next round of violence, rockets will make it all the way to the Tel Aviv area. He declared at a memorial service for Gazan’s killed in the fighting: “The first barrage to hit Tel Aviv will surprise Israel.”

He warned: “Whoever tests Gaza will find only death and poison. Our missiles are more precise, have a greater range and carry more explosives than in the past.”

Sinwar showed off a handgun with a silencer that he said was seized from Israeli forces during the botched operation in Gaza which prompted the escalation.

While the rockets have halted, the protests haven’t. About 9000 Gazans gathered on the border with Israel last Friday, for the latest of the weekly protests. Tyres were burned and stones were thrown at Israeli soldiers. Organisers insist the protests will continue until Israel “ends the siege.”

In the West Bank this week, an Israeli man was lightly injured when he was stabbed by a Palestinian. Police believe the attack was terror, and as of press time were still searching for the suspect.