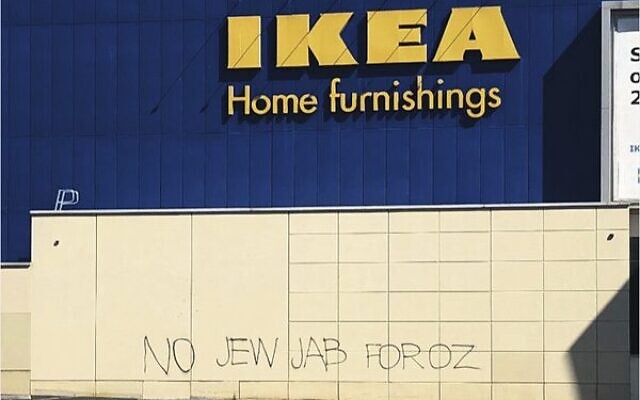 Vandalism outside IKEA in Richmond, Victoria.

INCIDENTS of antisemitism in Australia over the past year numbered 447, up by 35 per cent on the same period in 2020, Executive Council of Australian Jewry (ECAJ) research director Julie Nathan reported to the Jewish roof body’s annual conference on Sunday.

Nathan told the online event that the rise was 167 above the annual average of 280 incidents across 2013-20.

She said the Israel-Hamas conflict and media coverage of COVID lockdown breaches by members of the Melbourne Jewish community largely contributed to the spike.

Antisemitic incidents consisted of 272 attacks, including physical assaults, verbal abuse, harassment and graffiti, and 175 threats made through channels such as email, phone and mail.

Breaking down the figures, Nathan said abuse and harassment were up by 14 per cent on the previous period, graffiti by a massive 152 per cent, antisemitic stickers and posters by 157 per cent, and vandalism by 10 per cent.

As in the previous year, there were eight physical assaults.

During the Gaza conflict in May, Australian Jewish communities were targeted with attacks on synagogues, schools, Jewish businesses, and even private homes, she reported. Placards at anti-

Media coverage of COVID violations by “a tiny minority of Jews” received widespread mainstream media coverage, and despite official condemnation by Jewish leaders, “people were incensed at these breaches, made hate phone calls, emails were sent to synagogues and other Jewish organisations”.

“Those opposed to COVID-19 government health measures, such as vaccinations and lockdowns, have moved from ranting online about conspiracy theories, especially including denigrating the Jews, to being much more active in organising and attending rallies and street protests,” she observed.

Nathan also reported on the virulently antisemitic anti-Israel rally in Sydney held by Hizb ut-Tahrir in May with a number of speakers chanting slogans vilifying Jews, including “destroy the Jews” and “give us the necks of the Jews”.

As reported by The AJN last month, police are investigating the event.

The main neo-Nazi group in Australia, National Socialist Network, “remains active in recruiting, group bonding activities and propaganda”, Nathan stated. The group has been vocal online, “vilifying Jews, citing The Protocols of the Elders of Zion as fact, support for Hitler, and the like”.

“Like Antipodean Resistance before it, the National Socialist Network’s long-term goal is to be at the vanguard and take power within the next 10 years … and institute a regime of national socialism in Australia,” she warned.