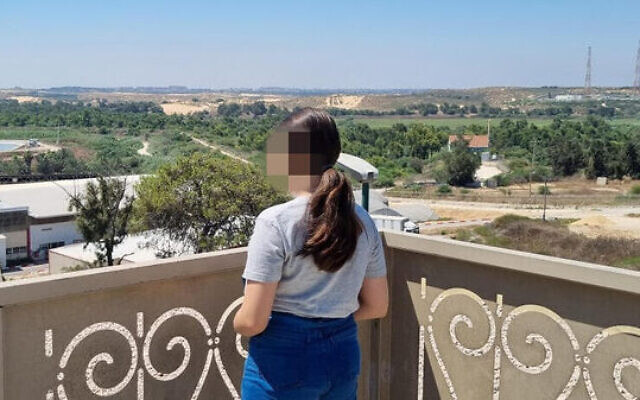 Facing repeated wars and never-ending military conflict, a 12-year-old Gaza Strip resident developed post-traumatic stress disorder to the point where she feared day-to-day activities and always sought to remain physically close to her parents, they said.

Recently the girl, whose is identified here only by the first letter of her name in Hebrew, Gimel, received permission to visit Israel with her father in what has been dubbed a “resilience visit”. The process was facilitated by the Ynet and Yediot Ahronot media outlets.

“Her fears ruled her,” Gimel’s father, who regularly crosses into Israel to work, told Ynet.

“Every time I go into Israel she fears something will happen to me,” he said. “I tell her again and again there’s nothing to worry about, that I go to Israel to earn a living for us.”

He hoped that seeing Israel and meeting Israelis might help to quell her fears.

“Unfortunately, there are children in Gaza who think that there are monsters living in Israel who only want to kill Arabs,” he added.

Once out of Gaza, Gimel hardly put down her phone’s camera. “What a beautiful view,” she told her father. “I like the green fields.”

She visited several towns across Israel, including Jerusalem, Jaffa, Ashkelon and Tel Aviv. She met with other children from Kibbutz Nir Am, an Israeli community near the Strip where she and her father stayed throughout their four-day visit.

Despite the language barrier, Gimel and Shoham, a 12-year-old resident of the kibbutz, managed to communicate using translation apps on their phones and spoke about topics ranging from social media and music to school and summer break.

Shoham noted that she was surprised, and concerned, to hear that Gimel did not have a bomb shelter in her home the way she did.

The two exchanged Instagram accounts at the end of their meeting. Shoham, who had sprained her leg, had a difficult time walking out.

“Lean on me, I’ll take you,” Gimel told her and they hopped outside.

“I wish you’d come again and we have more time together,” Shoham said.

Gimel and her father also held a larger meeting with children from Nir Am.

“I live in Gaza, who’s afraid of me?” Gimel’s father asked at the start, a question to which all of the children raised their hands. After a question-and-answer session, he again asked the children if they were afraid of him. This time, none of them said yes.

Gimel also visited a petting zoo run by the Hossen (“Resilience”) Centre in the Gaza-adjacent town of Sderot, one of the towns most affected by rocket attacks from terrorists in the Strip. The centre uses various means, including animal care, to help people deal with psychological trauma.

Gimel was accompanied by Ibrahim al-Etauna, director of the Bedouin Resilience Centre in the Negev.

“I got the impression that now she understands that reality is not black and white, but the thought of war still scares her. In any case, she said that now she will be less worried when her father goes to work in Israel,” he told Ynet.

At the end of the visit, Gimel noted that she wished she could stay longer.

“We want to live like good neighbours, with love and cooperation,” Gimel’s father said. “I hope that one day everything will be over and the children of Gaza and Israel will be able to live as good neighbours. If it was up to [the children], there would already be peace and everything would be fine. I hope my daughter can visit Israel again.”

As for Gimel, her fears amid conflict certainly won’t evaporate, but her views have unquestionably changed.

“I thought that in Israel everyone wore military uniforms and held guns, but the Jews were really nice,” she said.