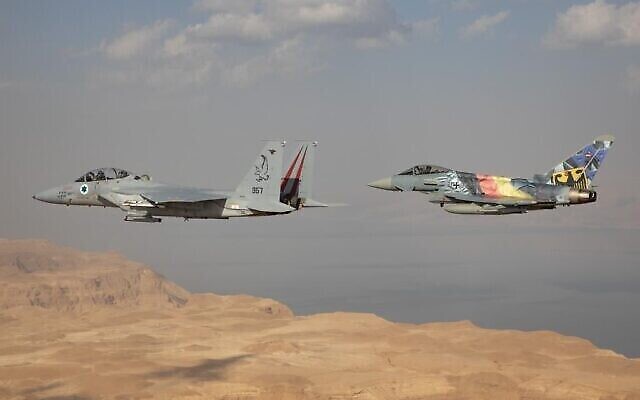 An Israeli F-15 and a German Eurofighter fly together near Jerusalem as part of a demonstration of the close ties between Israel and Germany on October 17, 2021. Photo: IDF

Israeli Air Force and German Luftwaffe aircraft performed a flyby over the Knesset in Jerusalem on Sunday afternoon as a display of the close cooperation between the two countries and their militaries, the Israel Defence Forces said.

This was the first time that German aircraft have flown over Jerusalem since World War I.

“The flyby expresses the strong partnership and connection between the air forces and the countries, as well as the commitment to continued cooperation in the future,” the IDF said.

Together, the commanders visited the Yad Vashem Holocaust Memorial Center to honor Holocaust victims and ensure a future of tolerance and peace. pic.twitter.com/iNSs8WR0p5

Sunday’s flyby was a continuation of a commemorative effort that began last August, when Israeli jets flew over the Dachau concentration camp and the Fuerstenfeldbruck airfield, where 11 Israeli Olympic athletes were killed by Palestinian terrorists in 1972.

“Roughly one year ago, we stood in the Dachau camp and together we visited the Olympic village where 11 athletes were murdered in Munich, and we said and declared together: Never again,” Norkin said in a speech at Yad Vashem.

Gerhartz, speaking in English, said he felt a “special responsibility” to maintaining good ties with the IAF as commander of the German air force.

“We still feel the suffering of the Jewish victims of the Shoah,” he said, using the Hebrew term for the Holocaust.

“Our responsibility will not expire. The eternal flame of remembrance must not fade,” he said.

The flyby began at 3:35 p.m., when the aircraft flew over the Knesset, continuing over the surrounding government complex, then leaving the area in the direction of the capital’s Malha mall.

Norkin, flying an F-15 fighter jet, led the Israeli aircraft, including an F-35 stealth fighter, while Gerhartz flew a Eurofighter that was painted in the colours of the German and Israeli flags.

Israeli Air Force & German Luftwaffe fighter jets performed a flyby over the Knesset – Israel’s parliament – in Jerusalem on Sunday. As the first of its kind since WWI, the show was a display of close cooperation between the two counties and their militaries – The Times of Israel pic.twitter.com/2jSszyW0N4

The flyby was part of a kickoff event for a multinational aerial exercise, dubbed Blue Flag, which is being hosted by the Israeli Air Force this month.

In addition to the German-Israeli flyby, another overfly was scheduled to take place on Sunday afternoon above Jerusalem and Tel Aviv with the six other countries participating in the drill: the United States, United Kingdom, Italy, France, Greece and India.

The Israeli Air Force credits the biennial Blue Flag exercise and other international aerial drills with improving its capabilities, as it both allows Israeli pilots an opportunity to see how other air forces operate and teaches them to effectively communicate with foreign pilots and crews, which may come in handy if Israel ever participated in a multinational military operation.

On a larger, strategic level, these international exercises also strengthen diplomatic relations between the participating countries.