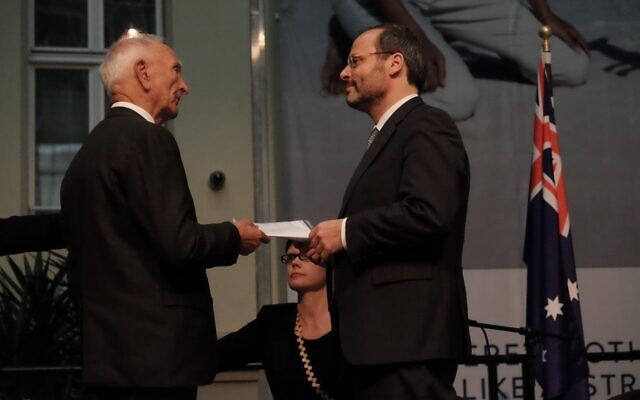 THE German government will issue a historic apology on Sunday, 82 years since the day that Yorta Yorta man William Cooper and a delegation from the Australian Aborigines’ League (AAL) marched to the German consulate in Melbourne to lodge a petition that protested against the “cruel persecution of the Jewish people by the Nazi government of Germany”.

The petition – which the consulate refused to accept – was considered to be among one of the very few private protests against the treatment of Jews to have occurred anywhere in the world following Kristallnacht.

Cooper and the AAL’s righteous act was even more remarkable given the status of Australia’s Aboriginal people at that time, who were denied full citizen rights – and would be for a further 29 years.

Commemorating the deed, the William Cooper Legacy Project (WCLP) will hold a special online event, “Lotjbadhan/B’yah’ad/Coming Together” on Sunday afternoon, whereby the apology will be presented in a video message by Federal Government Commissioner for Jewish Life in Germany and the Fight against Antisemitism, Dr Felix Klein.

In 2017, Klein met with Cooper’s grandson, then-89-year-old respected Yorta Yorta elder Alfred ‘Uncle Boydie’ Turner at the Australian embassy in Berlin. Uncle Boydie presented a copy of his grandfather’s letter, which was formally accepted and received.

On Sunday, Klein will go one step further, extending an official apology on behalf of Chancellor Angela Merkel.

Describing the letter of protest offered by Cooper and the AAL as a “courageous intervention [that] went unnoticed”, Germany’s ambassador to Australia Dr Thomas Fitschen said, “[It] gives testimony to the fact that the Aboriginal people of Australia were keenly aware of the terrible events in Germany and that they were ready to speak up and condemn the persecution of Jews, in a strong show of commitment to justice, unity and solidarity among the people of the world.”

He added, “We deeply respect and remember William Cooper and the Australian Aboriginal League for their fight against the persecution of Jews in Nazi Germany. And we owe sincere gratitude to his grandson Alfred Turner, known as Uncle Boydie, for nurturing lasting remembrance of the victims of persecution and those who stood up against it.”

Uncle Boydie responded to the development, saying he is “absolutely delighted” and “appreciative of Germany doing the right thing – even if it has taken this long”.

Set to address the special event, Yorta Yorta elder and educator Dr Lois Peeler enthused that she is looking forward to accepting the apology on behalf of the Aboriginal community. “We are working in solidarity with the Jewish community – which my ancestors were doing back then – and we think this is an incredible, important moment,” she said.

Meanwhile, WCLP convenor and key player in propelling the development, Abe Schwarz told The AJN, “All the people involved with the William Cooper Legacy Project are thrilled to hear that the German government are finally apologising officially.”

Jewish Holocaust Centre (JHC) museum director Jayne Josem said the JHC is “deeply moved” by the apology, adding, “The fact that Cooper and the AAL stood up for Jews when they themselves were not even recognised as citizens in their own land is truly remarkable and the acknowledgment is well deserved.”

The event will be held on Sunday, December 6 at 2pm, and will also feature musicians Kate Ceberano, Lior, Paul Grabowsky and Deborah Cheetham. To register, visit events.humanitix.com/william-cooper-legacy.