Few people around the world would not know the name William Shatner. But one Sydney writer knows him more than most. Joshua Brandon recently released Shatner’s latest biography, which he describes as a marriage between moments from Shatner’s life intertwined with future musings, rather than a traditional memoir.

“The focus of Boldly Go,” Brandon, who grew up in Sydney’s eastern suburbs with a strong sense of community, explained, “is often on the future – Bill talks about his hopes and fears for life on Earth, the profound and unexpected sadness he felt when he came back from outer space, and all the things he knows he will miss when he is gone.”

And yes, he’s on a first-name nickname-basis with one of the most famous people in the world.

For as long as he can remember, Brandon has wanted to be in the creative industry. While he said he always wanted to be a film and TV writer, there weren’t a lot of opportunities in Australia in the early 2000s, when “Burke’s Backyard was still the number one show on the air”.

“From an early age, I liked to play-act as different characters and make believe I was going on their adventures. I have pictures of myself as practically every heroic character – King Arthur, Indiana Jones, Zorro, a Ghostbuster, and yes, Captain Kirk,” he told The AJN. “As I got older, I gravitated towards different professions based on whatever TV or film I was watching at the time. When I watched The Practice, I wanted to be a lawyer; when I watched ER, I wanted to be a doctor, etc. Then one day it dawned on me, I don’t want to do any of those things – what interested me were the stories. That’s when I knew I wanted to be a writer, and later a director.”

So, he uprooted his life, alongside his cousin Steven, and moved to LA. While they were hired as staff-writers on a CBS sitcom called Friend Me, the show never made it to air. His experience though led him to write for Houdini & Doyle and Haven, which is where he was privileged to meet Shatner, who appeared in the final four episodes of the series.

While he only met Shatner in passing originally, something he described as a “memory to last me a lifetime”, it was on a whim that he decided to approach Shatner’s assistant to see whether anyone was taking pitches for book ideas. Imagine his surprise when he received a response saying to expect a call the next day. 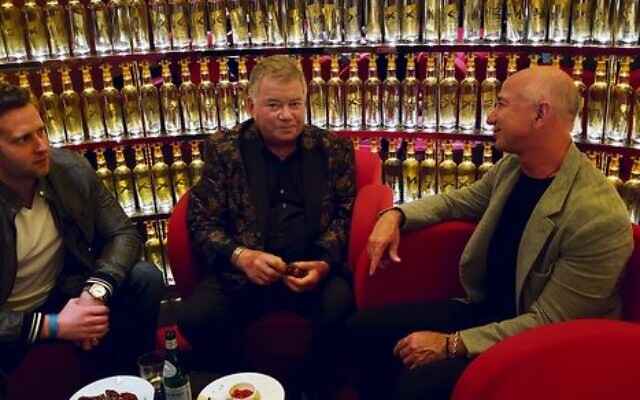 “So I spent the next 24 hours painstakingly putting together a verbal pitch for what I thought was a killer idea –William Shatner’s Kobayashi Maru – an insider account of how this larger-than-life personality kept coming back from career abyss; each time he was counted out, he reinvented himself and became more successful than ever before.

I pitched my little heart out for 10 minutes. There was a long pause, and finally Bill responded: ‘I wish I could tell you that my career has all been a concerted effort to bounce back, but I don’t really have any wisdom to convey. I have just lived my life and been very lucky. Perhaps the universe has been taking care of me, but it would be arrogant of me to tell others how to be successful. I only know what has worked for me,’” Brandon recalled.

“He has a fascinating, encyclopaedic mind, and half the time, I was just trying to keep up with him as he rattled off stories and facts and figures.”

“But he continued … ‘What keeps me going is my everyday thirst for knowledge. Every day, I wake up and I want to learn more. I want to read, I want to go out into nature, I want to commune with my dogs and my horses, to experience every little surprising moment the universe can offer.’

“He related a story to me about driving on a coastal highway in Ontario, Canada in the 1970s, and pulling over to the side of the road where an apple orchard was growing. He scrumped one of the apples and bit into it, and as he put it, it had reached its perfect maturation point – as he relayed the story, he could still hear the crack of the skin and taste the juices flowing down his throat. He described it as a perfect moment in the universe.

“‘I spend every day looking for moments like that,’ he said, ‘That’s why I spring out of bed every morning.’ Astonished, I replied, ‘Well, Bill… I think that’s the book.’”

So, the book was born.

The book was mainly written over Zoom – “To this day, I am still not over the surreal feeling of seeing ‘William Shatner has entered the waiting room’ on my screen,” Brandon said – with Brandon taking the transcripts, structuring the notes to send to Shatner who would then provide comments.

The process went on for close to a year. The difference, Brandon explained, is that rather than beginning with Shatner’s childhood and leading into the present day, Boldly Go moves between different moments from the actor’s life, intertwined with present-day musings.

Each conversation would start with a theme and how it impacted Shatner’s life. Brandon provides the example of ‘animals’.

“Bill would launch into stories of his love for all the creatures on Earth. How his parents wouldn’t allow him to have a dog, and yet a stray dog came into his life on the streets of Montreal, Canada.

“He would talk about keeping some of his food from school to feed her on his way home from school, the joy and comfort she brought to a very lonely Jewish kid in 1940s Montreal, but also the all-too-painful reality of life and death he learned when she was hit by a car and killed.

“He would then relate that experience to what we can learn from animals – how they are imbued with an unconditional love we spend our lives trying to live up to,” Brandon shared.

Shatner is very hard to keep up with, Brandon believes, due to his thirst for knowledge, explaining that during one conversation about planetary orbits, Shatner brought up Lagrange. While Brandon thought he was talking about the ZZ Top song, he was actually referring to the Italian astronomer.

“He has a fascinating, encyclopaedic mind, and half the time, I was just trying to keep up with him as he rattled off stories and facts and figures.

“His mind is so focused on whatever he is doing at a particular moment that it excludes all exterior noise. That’s why he knows so much – he is constantly reading, constantly learning, and that means sometimes the pleasantries are dispensed with along that journey,” Brandon said.

“Yet, when the work is done and you are just one-on-one with him, he is one of the warmest, kindest people I’ve ever met.” 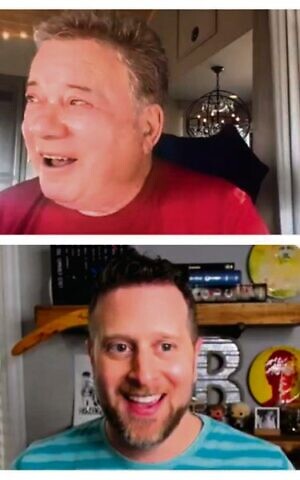 Brandon acknowledged that Shatner has written a number of memoirs and autobiographies in the past, saying the key challenge for the pair was finding how to make Boldly Go different, saying they had to “find areas of his life that he hadn’t elucidated before and to marry them to the adventures he was still on as he hit the 10th decade of his life”.

Brandon now describes it as Shatner’s most personal work.

“While there are triumphs and successes to celebrate, he also lays bare the deepest and darkest moments of his life, such as when he came home and found his wife Nerine drowned in their swimming pool, and the months afterwards in which he wanted to end his life but was rescued by the love of his three daughters,” Brandon revealed.

In an anecdote shared by the author, the day the proposal was sent off to the publishers was the very same day Shatner found himself zooming into outer space, on the second of Amazon founder Jeff Bezos’ Blue Origin space flights – what a beautiful metaphor for the book.

Boldly Go: Reflections on a Life of Awe and Wonder is published by Simon and Schuster, $45 rrp