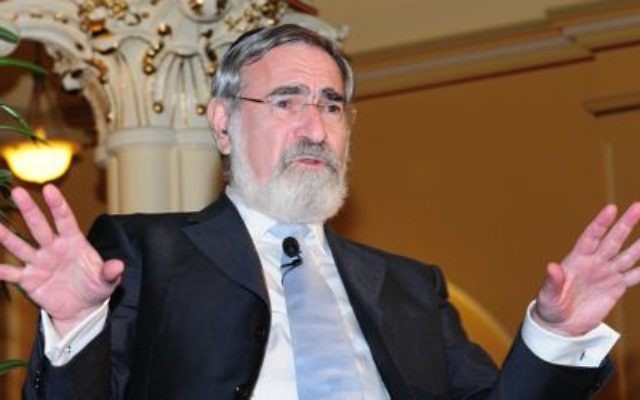 JUDAISM is not the only way to serve God, the Chief Rabbi of the Commonwealth Lord Jonathan Sacks told an audience of around 1000 people at The Great Synagogue last Wednesday night.

As part of his final tour of Australia in his current role, Rabbi Sacks discussed his book The Great Partnership: God, Science and the Search for Meaning, with renowned ABC journalist Norman Swan.

In an unrehearsed discussion, Rabbi Sacks touched on the relationship between religion and science, whether or not God’s existence can be proven, the meaning of faith, the place of religion in the modern world and many more topics.

Proclaiming that “God loves diversity”, the Chief Rabbi accepted that different interpretations of Judaism had their place in the world, as do other religions.

“Judaism has one aspect to it that Christianity and Islam did not borrow, which is the idea that righteous non-Jews have a share in the world to come,” he said.

“I think religion is singular at the top but plural at the bottom. There’s only one God, but there is more than one way of serving that God.”

Following that line, Rabbi Sacks also said that morality was not exclusive to the religious.

Talking about his book, in which he argues that religion and science can coexist, Rabbi Sacks said that as far back as 2000 years ago, Jews saw science as “one of the most beautiful gifts that God had given us”.

“When it says in Genesis chapter 1, verse 27 that God made us in his image, after his likeness, Rashi the great commentator says that that means with the capacity to understand and explore,” he said.

“So I think we can live with the fact that science is one thing, religion is another, and they are like the twin hemispheres of the brain.”

Speaking of religion’s place in the world today, the Chief Rabbi said the sacred texts of every religion were not meant to be taken literally, warning it could create devastation.

He also warned against mixing religion and state.

“Religion cannot handle power and there has to be a division … It can only work through society, and that means working through individuals and communities,” he said.

“Religion loves power and it should always be denied power.”

Rabbi Sacks also recognised the respective contributions of Christianity and Islam to the world, even citing the influence Islamic thinkers had on Moses ben-Maimon (Maimonides) in the 12th century.

“We don’t accept the world, we try and change the world.”
– Lord Jonathan Sacks, Chief Rabbi

“We don’t accept the world, we try and change the world.”

Interestingly, the Chief Rabbi conceded that the existence of God could not be proven.

“We believe that you talk to God. That you experience God. That you live a life according to his will, and then you find yourself relating to God,” he said.

“But the idea that you can prove as if God was something you demonstrated by Aristotelian synergies and more by scientific experiment, I don’t think so.”

The Chief Rabbi of the Commonwealth, Lord Jonathan Sacks