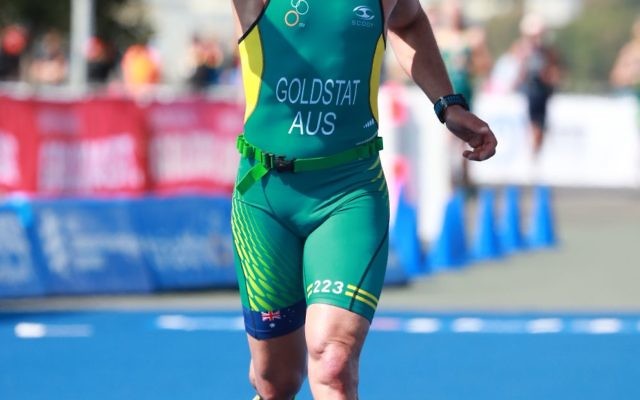 MACCABIAH Games hero Josh Goldstat capped off a year to remember with a gold medal on debut at the ITU World Championships on the Gold Coast.

“I’m absolutely thrilled to have won. Seeing my family in the grandstand at the finishing line was incredible,” Goldstat told The AJN.

Triathletes were forced to slog it out in tough conditions, with the mercury hovering around the mid-to-high 20s.

Goldstat admitted the weather was challenging, particularly coming off Melbourne’s winter months but he was confident in his preparation.

The first leg of the event, the 750m swim, “was brutal early on” with almost 100 competitors fighting to get into the front of the pack.

Goldstat was fourth out of the water and joined six others for the 20km draft legal ride, where he and three others opened up a 20-second gap heading into the home stretch, the 5km run.

From there, Goldstat powered past the leading pack to win by 14 seconds and in a time of one hour, 15 seconds.

“My race could not have been any better,” Goldstat said. “I had nothing left in the tank … I couldn’t have scripted the race any better … I am still pinching myself.”

Coming off four gold medals at last year’s Maccabiah Games, Goldstat then turned his attention to qualifying for the Australian team at the world champs.

“Once I was named on the team, I managed to train well, stay healthy and peak at the right time,” he said.

Along with Goldstat, Slonim (65-69) raced in the sprint distance event on Thursday, finishing 19th in a 60-strong field and fifth out of 25 Aussies, a result he was “very happy with”.