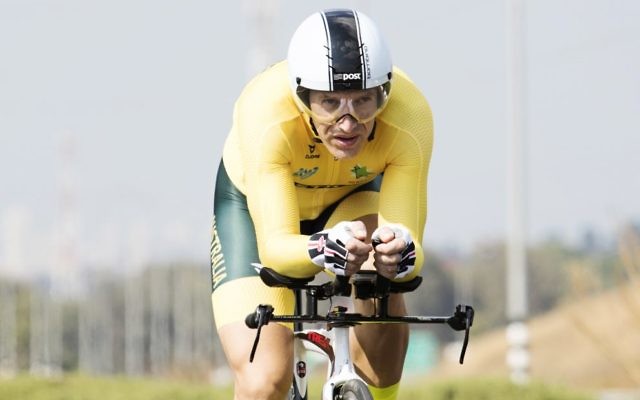 Emotion gripped the tight-knit trio at the finish line, with each using their own personal journey in the sport as motivation to shine on the Herev Le’et street circuit, on the outskirts of Hadera.

Lehrer dedicated his gold medal to his wife, who is looking after their one-month-old boy back home, enabling him to pursue his Maccabiah dream.

“I’m so happy – I was spending up to 18 hours a week on the bike in the weeks leading up to the Games, getting up at 4am on a Monday morning, riding 100km by myself each week,” Lehrer said.

“[But] you don’t know how you are going to perform even if you’ve trained hard. It’s been another great experience – my fifth Maccabiah Games – and it’s great to be back with Sean, a close friend of mine – we raced together four years ago.”

Bloch, who is also Australia’s flag bearer, said he’d told Lehrer the day before “if I come second, it better be you that’s first!”

And so it was.

“You couldn’t ask for it to go better – to pick up the medals in our age group,” Bloch said. “To clean sweep, no one would’ve dreamt it.”

A silver medal was redemption of sorts for Bloch, who’d won bronze at the 2013 Maccabiah Games, falling short of second place on that occasion by just one second.

For Goldstat, winning bronze meant that much more because it was his first time competing at a Maccabiah Games in 20 years.

The 42-year-old was involved in rescuing injured athletes during the tragic bridge collapse at the 1997 Maccabiah Games, in which four Australians died.

Only the week before this year’s Games, he’d had a tearful reunion with an Israeli policeman who he had teamed up with two decades ago to help the injured.

Goldstat only decided to compete again two years ago when he turned 40.

“I started racing again, sometimes winning my age group, and I just fell in love with it once more,” he said.

The news got even better for the Australian cycling team a few hours later, when it came third in the teams’ event, which is based on each country’s top-ranked times per age division.

Solid results by Daniel Rifkin in the men’s 30+ time trial, Dan Katz in the 50+ and Mark Schneider in the 60+ earned Australia a team bronze medal.