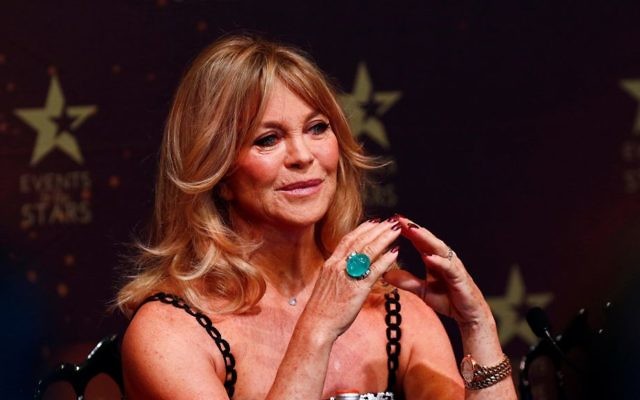 Goldie Hawn speaking to the media in Melbourne on Monday. Photo: Peter Haskin

HOLLYWOOD star Goldie Hawn was in Australia this week promoting MindUP, an initiative that has given nearly one million schoolchildren in nine countries the skills to manage anxiety, depression and stress – while also reducing bullying and combating self-harm.

Hawn met prospective Australian providers of MindUP, with senior educators, medical practitioners and government ministers attending a lunch to hear about the kids’ program, an initiative of the Hawn Foundation.

Hawn told The AJN her Judaism was a significant factor in motivating her to launch MindUP 14 years ago.

“I was raised a Jew – and I really take great pride in that,” she said, adding that she has studied kabbalah, and has also immersed herself in Hinduism, Buddhism, Jainism and Islam. She drew a link between faith, “a time when we commune”, and the ability to be happy “that may inform the brain”.

MindUP is being taught in classrooms in the US, Canada, the UK, Serbia, Finland, Jordan, Hong Kong, Australia and New Zealand.

The acclaimed actress, director and producer said the 9/11 attacks first got her thinking that “our children are suffering and the world is upside down”, and recent schisms in US society have created “a contagion of anger” that affects young people.

“When anyone is inciting anger and intolerance and racism … the brain attaches to these kinds of emotions … it feeds on itself and creates a sense of frenzy,” she said.

With anxiety disorders affecting one in six Australians aged 16-24, she would like to see a licensed structure for MindUP in Australia, so the program can be tracked and fine-tuned, as in larger regions where it has been rolled out. At present, “we don’t have any way of knowing how many teachers have bought it, how many teachers are implementing it”.

A Hawn Foundation spokesperson said MindUP comprises 15 lessons by a class teacher, providing students with an immersive experience along with daily practice.

“One in 16 young Australians is experiencing depression and three quarters of them are not seeking help. Suicide is now the number-one cause of death for young Australians, surpassing car accidents.

Hawn’s show, A Night of Laughs With Goldie, was staged in Melbourne on Monday night.