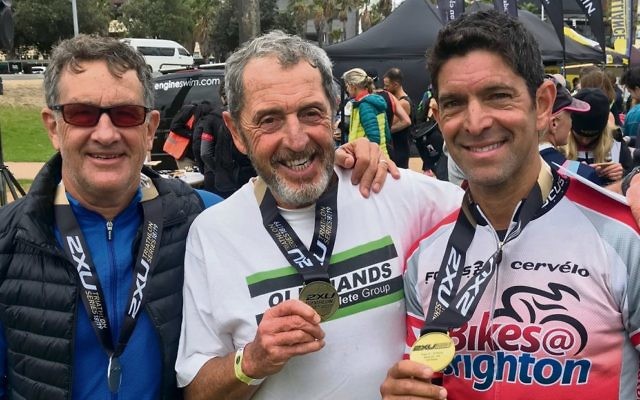 The 44-year-old took a well-earned month’s break after winning a memorable gold medal last September at the ITU World Championships on the Gold Coast, but upon return to training his left achilles did not respond well to running, forcing him to take a few months off and undertake an intensive rehab program.

Under the watchful eye of physiotherapist Kevin Lieberthal, Goldstat returned to competition, and did so with aplomb.

Taking to social media after the race, Goldstat said, “I love the challenge of competition, camaraderie, mateship and just pushing hard.”.

The early signs suggest that the recently crowned Maccabi Australia and Victoria Outstanding Masters Sportsman of the Year for 2018 will be hard to knock off again in 2019.

Returning to the 2XU Triathlon circuit after winning three of four races in his category last year, Goldstat proved there is no substitute for experience, showing up many high credentialed younger athletes, as he broke the tape in a time of 1:12:23.2, 20 seconds ahead of teenage runner up Darcy Williams and almost seven minutes clear of the next best in his 40-44 category.

The first leg of the sprint distance event was a 750m swim in chilly Sunday morning Port Phillip waters.

After 12:05.05 Goldstat emerged in 28th place overall and third in his category.

He then jumped on the bike for a 26.7km ride and made up for lost ground with an impressive sub-40 minute cycle, reaching speeds of over 40 kmh.

Heading into the final leg, a 5km run, Goldstat had the rest of his category easily covered but was facing an immediate challenge from a cluster of competitors more than half his age, two less than 50 seconds ahead of him, and a fast finishing pack behind him.

In true Goldstat fashion, he stormed home, clocking 3:50 minute kms in his time of 19:11.5, to chase down the front runners and secure yet another gold medal meet.

Usually supremely confident, Goldstat tempered his own expectations due to the compromised build-up he had to the event.

“I had little expectations other than I knew the intensity of racing is very different to that of training,” he told The AJN.

“I guess through experience, I was able to produce the right intensity on race day.”

A trio of other 2017 Maccabiah triathlon squad members competed and achieved strong results.

Neil Slonim, who like Goldstat won the Macman competition in his age group at the Maccabiah Games in Israel, finished first in the 65-69 age group of the sprint distance event, with fellow Jewish triathlete Gary Newstadt finishing a close second, just over 90 seconds adrift.

Slonim had Newstadt’s measure in the swim and bike legs, but the latter finished with a superior run time.

Veteran triathlete Barry Lipp put in a sterling performance in the Olympic distance event (1.5km swim, 40km bike, 10km run), finishing inside the top 10 of his 60-64 age group in a time of 2:44:07.7, racking up more circuit points, and thus boosting his selection chances for Australia at what would be his fifth World Championships in Lausanne, Switzerland later this year.

Goldstat will next be in action on April 14 in the Challenge Melbourne Sprint distance race, before he takes some time to rejuvenate and recover ahead of the qualifying process for the 2020 world championships in Edmonton, Canada.