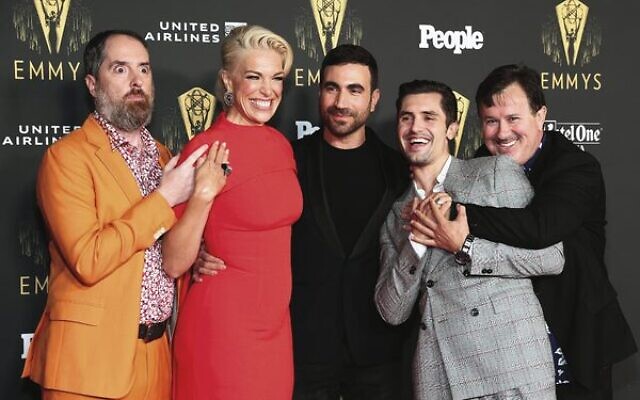 IT was a tale of two speeches at last month’s Emmy Awards.

Brett Goldstein, co-star of the smash hit comedy Ted Lasso, won best supporting actor in a comedy series, and proceeded to delight the audience with an acceptance speech inspired by his character’s penchant for swearing.

“I was very, very specifically told I’m not allowed to swear, so…” the Jewish actor said, before saying in a line that was beeped out of the live broadcast, “So this speech is going to be f***ing short.”

Ted Lasso, which is about an English soccer team that gets an ever-optimistic American as its new coach, captured four of the ceremony’s top awards, including best comedy series.

So proud of all the team, and so grateful to be a part of it. What an amazing night. At some point this will all sink in but for now, Let’s go Greyhounds!#TedLasso pic.twitter.com/6aIsaeMpVS

Besides Goldstein, the show also features Moe Jeudy-Lamour, who recently spoke about being a Haitian Canadian Jew who lives in Los Angeles.

Meanwhile, Scott Frank – the respected screenwriter and director who co-created Netflix drama The Queen’s Gambit, which took home two top awards – had the opposite effect with his acceptance speech, during which he ignored the show’s music telling him to wrap up a total of three times.

Netflix’s The Crown, created by Peter Morgan – who was born to a German Jewish father who fled the Nazis – also earned a slew of honours.