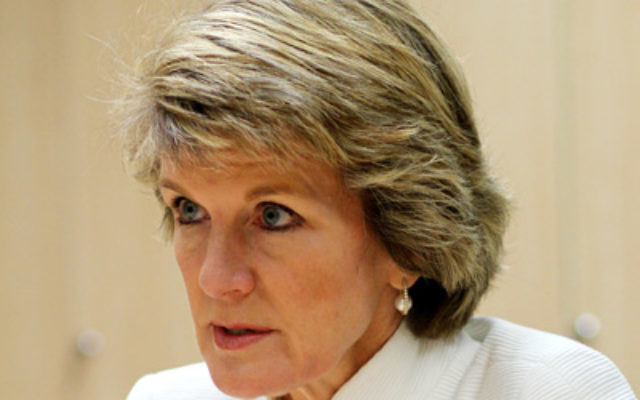 On Thursday, the Government voted against Bishop’s motion calling on the House to reaffirm its support for Israel and a two-state solution.

It did so after accusing her of having a “cheap shot” by tacking a second point onto the motion noting “the fraying of the traditionally bipartisan support” for Israel, criticising the Greens-led Marrickville Council’s support for a boycott of Israel and recognising that the NSW Labor Party chose to preference Greens candidates in Marrickville.

In their responses, Labor MPs noted their party’s ongoing support for Israel, but accused Bishop of “petty point scoring”. They sought to amend the motion to dump the part criticising the Greens and Labor.

But Bishop said on Thursday: “Labor has provided support to Greens and Labor members of Marrickville Council, protecting them from Parliamentary criticism about their decision to support the BDS campaign.”

The deputy leader of the Opposition had full support from the Coalition for her motion.  Her frontbench colleague Chris Pyne told Parliament the Boycott, Divestment and Sanctions (BDS) regime against Israel was a public relations trick by Israel haters.

“Having failed to conventionally defeat the State of Israel militarily since 1948, the proponents of the BDS campaign have chosen a more insidious method in order to undermine and delegitimise the State of Israel,” the Member for Sturt said.

Bishop, who raised these accusations, argued they stemmed from the Greens’ influence in the hung parliament.

“We have no association with the Greens political party and some of their extreme foreign policy,” Danby said. “I want to make it clear that there are members like me who will very strongly oppose Greens party policy.”

Vamvakinou, known for her sympathies for the Palestinian cause, acknowledged Israel’s 63rd anniversary.

She also raised the other “narrative”, arguing that when Zionist leaders created a Jewish home in Israel, they perpetrated an injustice “with the expulsion and dispossession of the Palestinian people”.

The Member for Calwell, an electorate in Melbourne’s north-western suburbs, observed that the Israeli Government was hesitating to make gains toward peace. But she added: “I can inform the House that the Palestinian President, Mahmoud Abbas, has conveyed to us in no uncertain terms that the Palestinians are ready to make peace.”