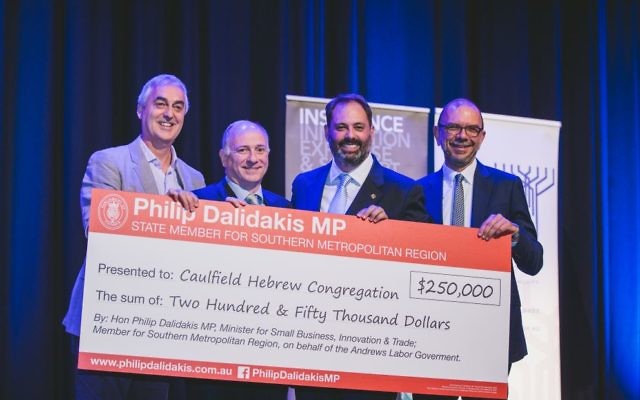 CAULFIELD Hebrew Congregation (CHC) received a $250,000 cheque from the Victorian State Government at their Yom Ha’atzmaut breakfast before 400 attendees at The Palladium at Crown on Sunday.

The money, which was presented to the shul by the State Member for Southern Metropolitan Region Philip Dalidakis, will be used to establish a multi-purpose youth hub.

“The centre will provide space for use by Hineni, and our children, and Caulfield Bubs programs,” CHC president Anthony Raitman told The AJN.

“It will also provide us with the opportunity to expand into holiday and after school programs.”

Rodney Horin, the chair of the Caulfield Hebrew Congregation’s redevelopment project, thanked the government for its contribution, stating that it “represents validation for our community and youth centre development, and its need in the community”.

The grant is part of the Community Infrastructure and Cultural Precincts (CICP) program that was announced by the State Government last week.

The CICP program aims to promote the greater use of community facilities by various multicultural groups.

Five Jewish organisations are among the 30 that will receive CICP funding.

The AJN understands that the Jewish Holocaust Centre has received $750,000; the Jewish Museum of Australia is the recipient of $50,000; the Young Australian Israel Chamber of Commerce Somali Mentoring Program has secured $40,000 and the St Kilda Hebrew Congregation has been given $33,000.

While the presentation of the cheque to CHC was a highlight of the Yom Ha’atzmaut breakfast, keynote speaker Daniel Taub, Israel’s former ambassador to the United Kingdom, was well received by those in attendance when he spoke about some of the “fundamental assumptions” that dominate anti-Israel rhetoric and attempts to delegitimise the State.

He asserted that there is a disproportionate emphasis on the Israeli–Palestinian conflict as “key to solving everything else”.