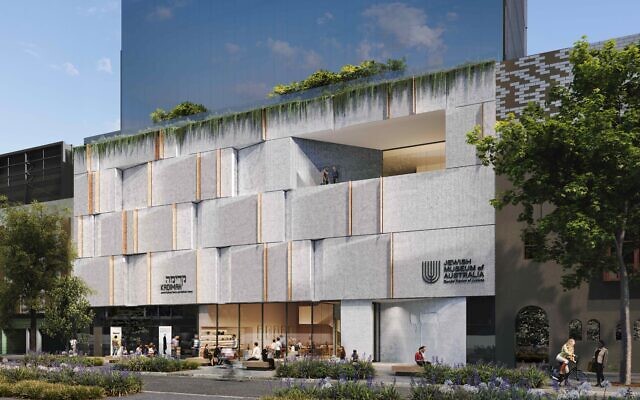 An artist's impression of the Selwyn Street development.

THE development of Melbourne’s new Jewish Arts Quarter (JAQ) has taken a major leap forward with the Victorian government officially granting it planning.

The precinct to be developed in Selwyn Street, Elsternwick, is being hailed as an inclusive destination that will offer great museum experiences, art, theatre, education, learning, music, food and shopping, as well as public spaces.

Adjacent to the Jewish Holocaust Centre, the JAQ is set to emerge as the revitalised home for the Jewish Museum of Australia: Gandel Centre of Judaica (JMA) and Kadimah Jewish Cultural Centre & National Library.

Melbourne’s new hub for Jewish life and culture got the green light from Minister for Planning Richard Wynne, who accepted the findings of the Independent Priority Projects Standing Advisory Committee.

Noting the JAQ is expected to generate $65 million in investment during construction and create 210 construction jobs and 31 ongoing jobs, Wynne said, “Projects like the JAQ have immediate economic impacts as well as long-term cultural benefits for all Victorians.”

Minister for Multicultural Affairs Ros Spence added, “The JAQ will be an important place for the community to celebrate and share Jewish history and traditions – and we are proud to be supporting what will be a wonderful new space.”

JAQ director and president of Sholem Aleichem College Ben Mand, who was informed of the planning approval by Spence, enthused, “It was a great call to receive and the minister with her kind words has lifted all our spirits.

“Having reached this achievement, we can continue our positive discussions with the state and federal government in relation to funding commitments, enabling the project to commence.”

To date, the Victorian government has committed $5 million to the project.

Looking ahead, JAQ director Barry Fradkin said, “As soon as our funding commitments are secured, we will commence development which will be approximately a two-year build.”.

Gideon Kline, JAQ director and JMA president, commented, “The Jewish Museum of Australia: Gandel Centre of Judaica, and our friends at both Kadimah Jewish Cultural Centre & National Library and Sholem Aleichem College are working collectively towards creating something unique and special, a hub for learning and immersion in Jewish arts, culture and history, in a way that is quintessentially Australian.”

Kylie Appel, JAQ engagement manager added, “We believe in the significance of this multi-generational project and its potential to build upon the state government’s values of supporting multiculturalism and diversity. The JAQ will encourage and foster social cohesion, mutual respect, tolerance, understanding and a greater multi-faith engagement across our entire community.”