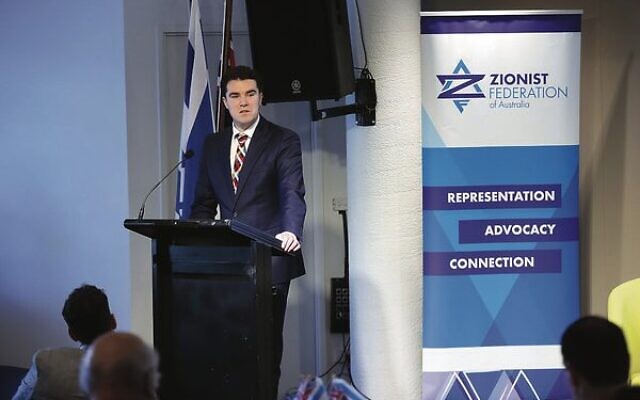 Watts addressed the government’s recent decision to withdraw its recognition of west Jerusalem as Israel’s capital. The minister said the timing of the decision on a Jewish holiday was “deeply regrettable”, but insisted it did not represent a change in the government’s commitment to “a two-state solution in which Israel and a future Palestinians state can coexist in peace and security and within internationally recognised borders”.

He stressed, “As a friend of Israel, we will not support unilateral actions that undermine this peace process,” and, “as a responsible international actor, we won’t impose our views on final borders or boundaries” as it should be a result of peace negotiations. Watts also criticised the UN’s focus on Israel stating, “We call out the unfair and discriminatory focus on Israel in these forums, and we will continue to do so going forward.”

Regarding antisemitism on Australian campuses, Watts encouraged universities to embrace the International Holocaust Remembrance Association’s (IHRA) Working Definition of Antisemitism. He said: “The fact that life is becoming more and more hostile for [Jewish students] on our university campuses is a cause of great distress for me. I think that Australian universities absolutely have an obligation to ensure that the IHRA definition is embraced and put into action on our campuses … I think [the definition] is an important prerequisite for facilitating exactly the kind of discussion and exchange of views that universities are supposed to promote.”

The conference also held panel discussions on “Israel programs into the future” and “Being a Zionist in progressive spaces: The clash between identity politics and Zionism”, as well as a workshop “Talking tachlas: solutions to build our future”.