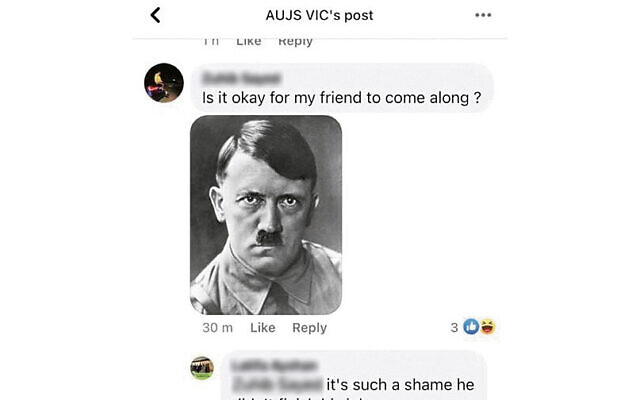 THE NSW Department of Education says an employee who posted a comment on Facebook saying “it’s such a shame [Hitler] didn’t finish his job” is no longer employed by the department.

The comment, which appeared under a photo of the Nazi leader, was left on the Australasian Union of Jewish Students (AUJS) Victoria’s Facebook page in May. For months, however, the staffer remained in their role.

The AJN understands the staffer’s contract was not renewed by the department following an investigation.

Welcoming the decision, Secord told The AJN on Friday, “This has been a long-running and frustrating saga, but I’m pleased that the NSW government has confirmed that this person is no longer with NSW Education. Anyone making antisemitic remarks or posts should have been raced out of the department without delay. Unfortunately, it took the NSW government months to act.”

NSW Jewish Board of Deputies CEO Darren Bark added, “It was alarming that such comments were made by a representative of the NSW government, particularly the Department of Education, which has a fundamental responsibility to the safety and protection of our children.

“The Jewish Board of Deputies will fight antisemitism no matter where it resides, particularly online where people may try to hide their true identity.”

In August, The AJN reported that a freedom of information request by Secord, who sought details on what action was taken against the employee, was denied in a rejection letter by the Education Department.

In a letter to NSW Education Minister Sarah Mitchell, Bark said the refusal by her department to release relevant information had been “met with considerable disappointment”.

“Transparency in relation to the status of this individual’s employment with the Department of Education, and the timeframes associated with the conclusion of the investigation would go a long way to reassuring the community that your Department is addressing this issue appropriately and promptly,” Bark said.

In his letter, Conolly said granting the freedom of information request “may have jeopardised the integrity of the investigation and subsequent disciplinary action”.

“I am sure you can also understand that the department must ensure employees are afforded procedural fairness in any investigation of their conduct,” he added.

AUJS’ political affairs director Gabi Stricker-Phelps told The AJN, “We are grateful that the NSW Department of Education has finally taken this stance. We hope it sends a clear message to anyone engaging in antisemitic rhetoric that it’s not welcome, appropriate or tolerated in our society and that there are severe consequences for such behaviour.”