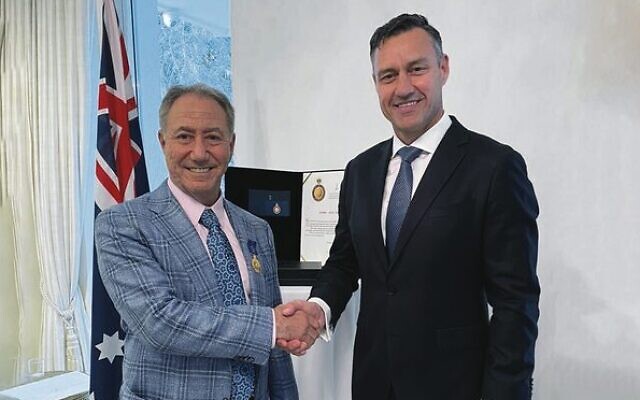 “IT’S the first medal that I received that I did not really have to fight for,” Danny Hakim said as he was presented with his Order of Australia Medal (OAM) in Israel.

The ‘Budo for Peace’ founder was named in the Australia Day honours list for service to the international community through a range of roles, but only received his medal this month from Australia’s ambassador to Israel Paul Griffiths.

“Honoured to invest an Order of Australia Medal to Australian-Israeli Mr Daniel Hakim for a range of roles, including founder of Budo for Peace, Kids Kicking Cancer, Alliance for Middle East Peace, Chairman of Israel Surf Lifesaving Federation, and many more,” Griffiths said.

Hakim, whose list of achievements include being a two-time world karate silver medalist for Australia and an Alliance for Middle East Peace board member, said he was surprised and honoured, “as I never thought an OAM would be given to an Australian who left his country for an ideal to live in the Jewish homeland.”

Hakim was born in Adelaide to Egyptian Jewish parents, before he moved to Sydney with his family and, with the help of his grandmother, discovered karate.

“I was a small kid and my peers looked at me as a migrant Jewish kid, and a good game to be bullied,” Hakim said.

“For my bar mitzvah, my grandmother bought me a one-year subscription to karate classes. She had experienced antisemitism in Egypt and her parents experienced the pogroms in Odessa and believed that I should do a sport that would come in handy. That was the start of my journey of becoming a fighter, educator, and philanthropist today.

“My grandmother and father passed away 25 years ago and I know they would be smiling today.

“They were so proud when I represented Australia as I was also representing my Jewish community. On my team, we had Australians from Lebanon and Iran. We became very close friends and they too were proud to represent their Christian and Muslim communities. It was these personal people-to-people relationships that demonstrated clearly to me that sport transcends politics, religion, and differences.”

Hakim went on to thank Australia for the learning experiences, particularly through sport, that he brought with him to Israel.

“Sport in Australia is a religion,” he said. “It is about fair play and equality. It is a platform for breaking down ignorance and fear and bringing communities together.”

Hakim is also chairman of the Israel Life Saving Federation and he, along with his brother Paul, was instrumental in seeing competitive lifesaving added to the 2022 Maccabiah Games.