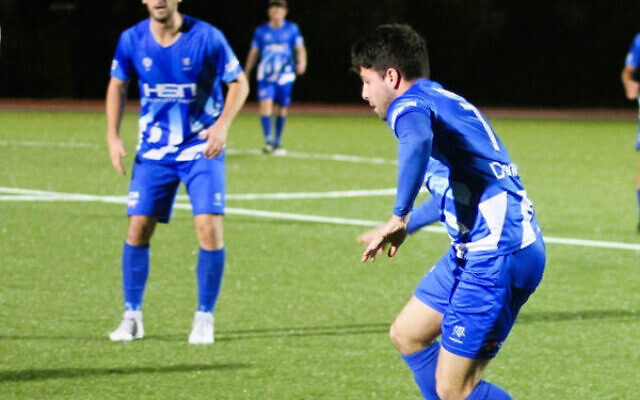 Hakoah's Jordan Koton in action in their round 6 Australia Cup win over Sydney Uni on Tuesday night.

After their pulsating penalty shootout upset win against NPL NSW club Marconi a fortnight ago in round 5 of the Australia Cup, State League One club Hakoah FC had an easier task on paper in round 6 on Tuesday night, when they hosted State League Two side Sydney University.

But you can’t just beat teams on paper, they need to be beaten on the field.

And that’s what the Hakoah men did, winning 4-1 to advance to round 7, which is the last preliminary round before 10 A-League Men teams, and remaining interstate amateur and NPL clubs, enter the competition.

Hakoah’s side for the match included Jewish players Jordan Koton, Ryan Blumberg (who both started), and Ben Fuchs (on the bench).

There were few scoring opportunities for either side in the first half, and Hakaoh only led 1-0 when a clever chip by Steven Sohn beat Sydney Uni’s keeper two minutes before half-time.

But their attack clicked in the second half, with Dom Cox scoring a hat-trick, before Sydney Uni scored a consolation goal in the 90th minute.