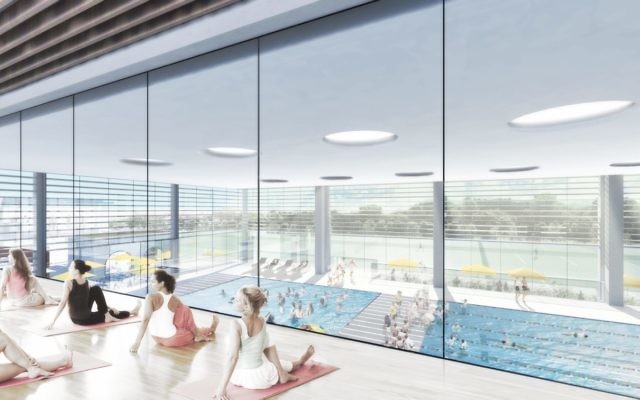 An artist's impression of part of Hakoah's proposed development. (Supplied)

After weeks of fighting, a court case, an Annual General Meeting (AGM) that was going to be contested and an Extraordinary General Meeting only weeks away, a truce was reached between the Hakoah board and the opposition.

As a result Hakoah president George Farkas, as well as new board members Michelle Meyer and Simon Wilkenfeld, were elected to the board unopposed in front of more than 200 people at the AGM on Tuesday night.

The agreement, brokered by Lowy, will give the current board until the end of the year to work through heritage issues, planning issues and the development application (DA) for Woollahra Council.

But, if by the end of 2015 the Hakoah board has not been able to demonstrate to Lowy’s satisfaction that its DA for both the community facilities and full-sized soccer field will be approved by Woollahra Council, it will resign.

“I saw both parties and I felt that we don’t need to have this controversy and in-fighting and to my surprise both parties were quite receptive to a reasonable idea,” Lowy told The AJN.

Lowy said he hopes the current board can make progress throughout the year.

“I will be made aware of what is happening and I would make my recommendation based on the prospects of getting a DA.

“It will not include the financial side because until we recognise what Council will let Hakoah build we can’t work out how to fund it.”

Farkas said the Hakoah board welcomed the agreement brokered by Lowy.

“[The board] very much hopes will bring an end to hostilities both overt and covert against the board and its plan and allow it to proceed unimpeded in achieving its goal of having a DA approved.”

David Balkin, who was part of the opposition group, said he accepted the offer because the board will now be held to account.

“There is now a finite time frame for them to deliver what they have been promising the community.”

Farkas elaborated on the board’s plans at the AGM.

“Your board’s plan will see magnificent sporting and social communal facilities built that the whole family can enjoy for generations to come,” he said.

Proposed sporting and leisure facilities will include an indoor aquatic centre, a multi-purpose indoor sports complex, a full-sized football field, a gymnasium and a total of nine tennis courts.

The first stage of the project will see the construction of the football field, grandstand and indoor café, the first two levels of the club building and an outdoor 25-metre lap pool and basketball court which will ultimately be replaced by the indoor aquatic centre and multipurpose sports centre.

“Our financial model indicates that the stage one facilities will generate all the income your club needs to be economically viable without the need to sell off land,” Farkas said.

An artist’s impression of how the indoor aquatic centre might look.