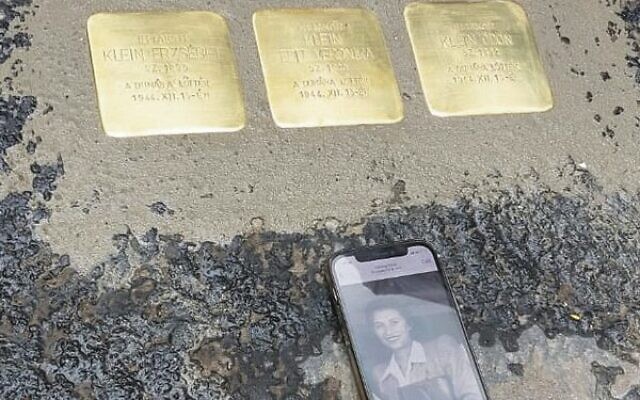 The Stolpersteine Halas dedicated in honour of his late mother and grandparents, who were murdered in Budapest.

Child Holocaust survivor Peter Halas recently returned to his birth country of Hungary for an emotional ceremony to honour his late mother and grandparents.

In August this year Halas – together with his wife Yvonne, daughter Simone and her husband Paul Kanat, as well close friends Vivienne and Chris Kalowski – dedicated Stolpersteine in memory of his mother and grandparents, who were murdered by the Arrow Cross (the Hungarian equivalent of the SS) on December 15, 1944 in Budapest.

‘Stolpersteine’, also known as ‘stumbling stones’, are small brass stones embedded into the cobblestones of streets around Europe. Each one commemorates a victim outside of their last-known place of residence.

“The stones were placed in front of the house where we lived before going into hiding early 1944,” Halas said.

“The small gathering witnessing the dedication included the head of the Hungarian Cultural Association and Anna, who organised the event and the stones. There were also some curious neighbours.

“The speeches were from the organisers in Hungarian translated to English, and by our daughter in English translated to Hungarian. The ceremony lasted some 20 to 25 minutes, but it was dignified and emotional.”

Halas said one of the non-Jewish neighbours offered to keep an eye on the stones and clean them from time to time, knowing that Halas and his family now live in Australia.

“It is rare that a day passes that I don’t think of my mother and the horror of the day she was killed,” Halas said.

Halas, who arrived in Sydney in 1957 with no family and speaking no English, went on to found the iconic Australian swimwear label Seafolly. After his emotional return to Budapest, Halas has urged other members of the community who lost relatives in the Shoah to organise this “fitting memorial to the memory of their relations”.

“The Stolperstein is also a reminder to all who see it of what can happen when hate takes over,” he said.

Halas with his family and close friends during the dedication ceremony.