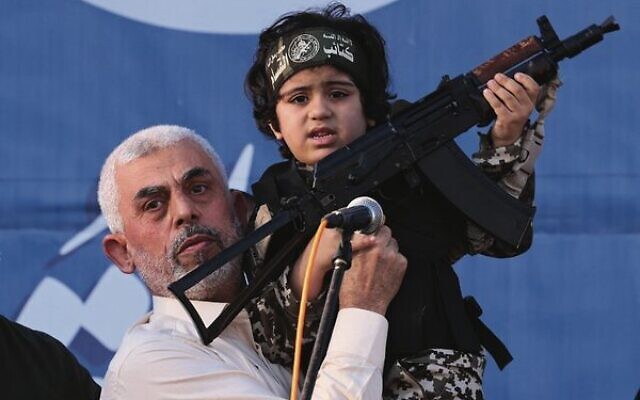 Hamas leader Yahya Sinwar holds the child of an Al-Qassam Brigades fighter, killed in the May 2021 conflict with Israel, during a rally in Gaza. Photo: Emmanuel Dunand/AFP

THE terrorist group Hamas has praised the artists who have chosen to boycott the Sydney Festival.

Comedians Judith Lucy, Tom Ballard and Nazeem Hussein, the play Seven Methods of Killing Kylie Jenner and First Nations dance company Marrugeku are among more than 20 artists and acts who have pulled out of the festival due to the Israeli Embassy providing $20,000 in sponsorship for the dance performance Decadance – created by Israeli choreographer Ohad Naharin – which opened at the Opera House to rave reviews.

According to the Palestinian Information Center, Hamas said in a statement late last week, “We commend and appreciate this decision that came in solidarity with the Palestinians’ legitimate rights, and in opposition to the Israeli crimes against our Palestinian people.

“We declare our solidarity with the participants who have withdrawn from the festival, and we call on all participants to raise their voices in face of oppression and injustice.”

Executive Council of Australian Jewry co-CEO Peter Wertheim said it was “now plain” that the boycotters have “unwittingly furthered the cause of the misogynists and homophobes of Hamas in seeking the obliteration of Israel”.

“A more accurate description of the ends their actions are serving would be ‘Artists for Genocide’,” he said.

Hamas perpetuated dozens of suicide bombings against Israeli civilians during the second intifada and since taking over Gaza in 2006 has fired thousands of rockets at Israeli population centres.

Its Izz al-Din al-Qassam Brigades has long been designated a terrorist group by the Australian government and late last year a parliamentary committee recommended the group be proscribed in its entirety.

The organisers of the boycott of the ⁦@SydneyFestival⁩ finally have the endorsement of their ideological parent – Hamas ! https://t.co/MDm6MhonvC

In the United States, at least 35 States have laws, executive orders or formal resolutions against boycotts of Israel.

“It is now time for real and meaningful action on the BDS,” Secord said.

Last Friday Secord wrote to Franklin asking that the Perrottet Government consider introducing a policy whereby if NSW arts organisations agree to the BDS policy or ban Israeli artists or productions, then they will not receive state government funding.

“Put simply, I believe that if an organisation takes the decision to institute or support a boycott of Israel, that is their prerogative – but then it should not expect to receive any state government funding,” he said.

Secord said he was aware that overseas experience shows that arts organisations have extended their boycott to include performers who were born in Israel or are Israeli citizens – or performances with Jewish themes.

“That is irrational, bigoted, and absolutely unacceptable,” he said.

“Unfortunately, I fear that the 2022 Sydney Festival experience will see NSW arts groups reluctant to invite Israeli performers and artists to our shores – or refuse to stage Israeli or Jewish-themed plays. This will also inhibit important cultural exchanges.

“And ironically, a boycott of Israel is utterly counter-productive. It hurts not just the Israeli government, but Jewish and Arab citizens, and the Palestinian people too. Worse yet, it actually makes Israeli-Palestinian peace more distant.”

In a weekend Facebook post, Franklin said he had seen the performance, describing it as “innovative, dazzling and deeply moving”.

“I am a passionate supporter of artists expressing their independent views without fear or favour.

Every artist must walk their own path and act in accordance with their beliefs,” he said.

“However I do have significant concerns about trying to shut down specific creative voices simply on account of their nationality.

“To start demanding artists boycott festivals and events because of differing views about the world’s geo-political situation risks silencing other diverse voices that are valuable for us to engage with as a society.”

Wentworth MP Dave Sharma said on Friday that artistic boycotts “are not going to help achieve peace, but are instead focused on the perpetuation of conflict and division”.

“It is difficult to avoid the conclusion that this new political sensitivity adopted by some Australian artists applies only to Israel,” he said.

“In the United Arab Emirates, Israeli cultural performers and tourists are being welcomed with open arms, as such cultural and artistic exchange is seen as a way to promote peace and coexistence between peoples.”