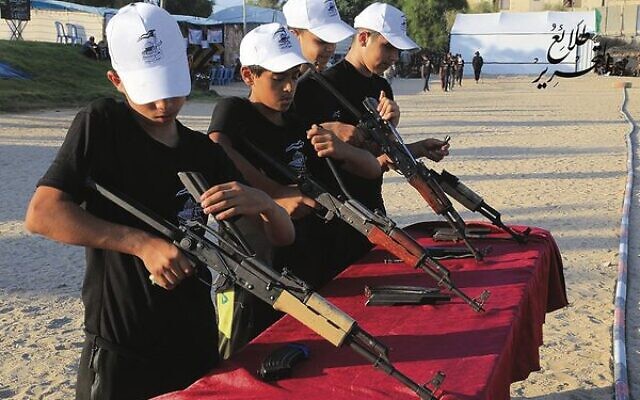 Gaza children trained in the use of weapons at a summer camp earlier this year. Photo: Hamas

For many years now, Australia’s terrorist list has included an entity called Hamas Izz al-Din al-Qassam Brigades, rather than Hamas in its entirety. But an Australian parliamentary committee is currently considering whether to recommend a change to this partial designation of Hamas.

The Parliamentary Joint Standing Committee on Intelligence and Security (PJCIS) recently held a public hearing to discuss the re-listing of the Hamas Izz al-Din al-Qassam Brigades as a terrorist organisation. Every three years, this committee is required to review Australia’s terrorist listings to ensure that only groups which continue to pose a threat remain listed.

During the hearing, members of the PJCIS considered the idea that Australia’s listing should be expanded to include all of Hamas.

While the committee’s recommendations won’t be tabled for some weeks, it is possible the PJCIS will recommend to Minister for Home Affairs, Karen Andrews, that she consider an expanded listing for Hamas. And there would be a precedent to this recommendation. After conducting a similar public hearing, the same committee made a bipartisan recommendation on June 22 “that the government consider expanding the listing [of Hezbollah’s external security organisation] to include the whole organisation of Hezbollah”.

To the Australia/Israel & Jewish Affairs Council – and our counterparts at the Executive Council of Australian Jewry and the Zionist Federation of Australia who also gave evidence – it is clear that Hamas, in its entirety, should be listed as a terrorist organisation by Australian authorities. Mike Burgess, director-general of security at ASIO, told the PJCIS he agrees. Richard Feakes, Australia’s deputy counter-terrorism coordinator and a former Australian ambassador to Afghanistan, told the committee there is a “compelling case” for the expanded listing.

So why is it that Australia should replace the Hamas Izz al-Din al-Qassam Brigades on its terrorist list with all of Hamas?

Most obviously, Hamas operates as a unitary group. Its politburo oversees and directs the militia. Officials move between military command and political positions.

Yahya Sinwar, Hamas’s chief in Gaza, is ostensibly a “political” leader. After the May conflict he said, “We support the eradication of Israel through armed jihad and struggle. This is our doctrine.” Sinwar, a former commander in the Izz al-Din al-Qassam Brigades, was convicted by Israel and given four life sentences for his role in the kidnap and murder of two Israeli soldiers in the 1980s. He was released as one of the 1000 Palestinian prisoners exchanged for detained Israeli soldier Gilad Shalit in 2011.

Sinwar is just one of a long list of Hamas officials who serve not only the political goals of the organisation, but also the violent objectives of Hamas’s militia, the Izz al-Din al-Qassam Brigades.

There are other compelling reasons why Australia should list the entirety of Hamas as a terrorist organisation.

Dr Jonathan Schanzer, senior vice-president for research at the Washington-based Foundation for Defence of Democracies, told the PJCIS that if Australia is serious in its support for a two-state peace, it should do everything it can to isolate Hamas.

Hamas’s antisemitic, conspiratorial founding charter from the 1980s rejects the idea of a Palestinian state in Gaza and the West Bank. Hamas’ intention is to destroy Israel in its entirety.

In recent years, Hamas has been searching for international legitimacy by developing closer ties with Turkey, Qatar and Malaysia. Analysts have also suggested that Hamas is seeking to emulate the Taliban, which has achieved its long-held goal of reasserting control over Afghanistan.

Hamas official Mousa Abu Marzuq confirmed this in an August 16 tweet: “The Taliban are victorious today after being accused of backwardness & terrorism. It became more pragmatic. They have stood up to the US & its agents refusing compromise, they have not been fooled by slogans like democracy & elections. This is a lesson for all oppressed peoples.”

Hamas is also undeniably dependent on the region’s biggest sponsor of terrorism, Iran. Australia’s Foreign Minister Marise Payne acknowledged this in Parliament in August. She noted, “Iran’s well-documented supply of funds and weapons to terror organisations like the Hamas Brigades, Islamic Jihad and others fuels instability and violence.”

And after overseeing the firing of thousands of rockets at Israel, Sinwar paid tribute to his backers in Teheran. “Our complete gratitude is extended to the Islamic Republic of Iran, which has spared us and the other Palestinian resistance factions nothing in recent years.”

Finally, designating Hamas in its entirety would prevent neither Australia nor Australians from continuing to support the humanitarian needs of Gazans. Providing aid via UN agencies or charities like the International Committee of the Red Cross, could continue.

Naomi Levin is a senior policy analyst at the Australia/Israel & Jewish Affairs Council. She provided evidence to the PJCIS on its review into the relisting of Hamas Izz al-Din al-Qassam Brigades.